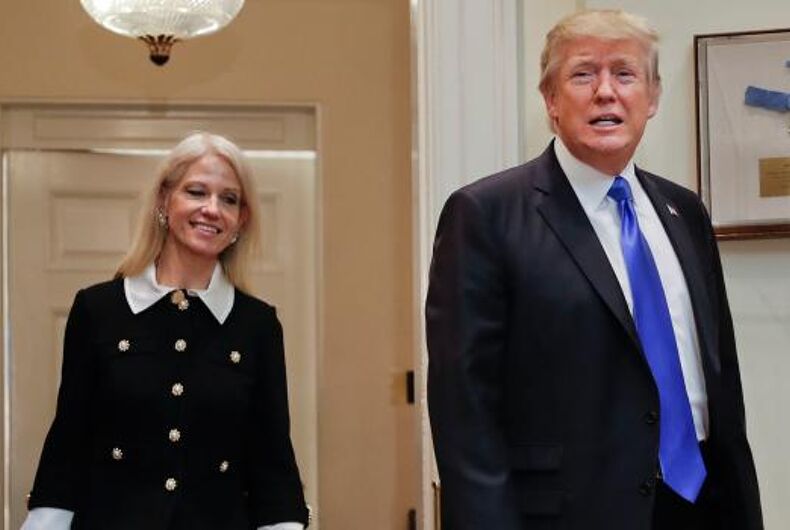 Kellyanne Conway is back to spinning for President Trump, amid the controversy surrounding his firing of FBI Director James Comey, but it seems she might hate it as much as Sean “take-to-the-bushes” Spicer.

As Mediaite first reported, Morning Joe hosts Joe Scarborough and Mika Brzezinski said on Monday’s show that once off camera and off mic, Conway would regularly speak ill of Trump, whom she reportedly started referring to as her “client” after the Access Hollywood tape leaked.

“This is a woman, by the way, who came on our show during the campaign and would shill for Trump in extensive fashion and then she would get off the air, the camera would be turned off, the microphone would be taken off, and she would say ‘bleeech I need to take a shower’ because she disliked her candidate so much,” Brzezinski said.

Scarborough said suggested she was only in it for the money.

“She said, ‘This is just my summer vacation, my summer in Europe, and basically I’m just gonna get through this,'” he said.

“But first I have to take a shower because it feels so dirty to say what I’m saying,” Brzezinski said. “I guess she’s just used to it now.”

Conway worked for a super PAC that supported Ted Cruz before joining Trump, and had criticized him as having, “built his businesses on the backs of the little guy.”

Conway also previously called Trump out for failing to pay contractors, and said he should release his tax returns.

Swingers club masquerading as church shut down in Tennessee