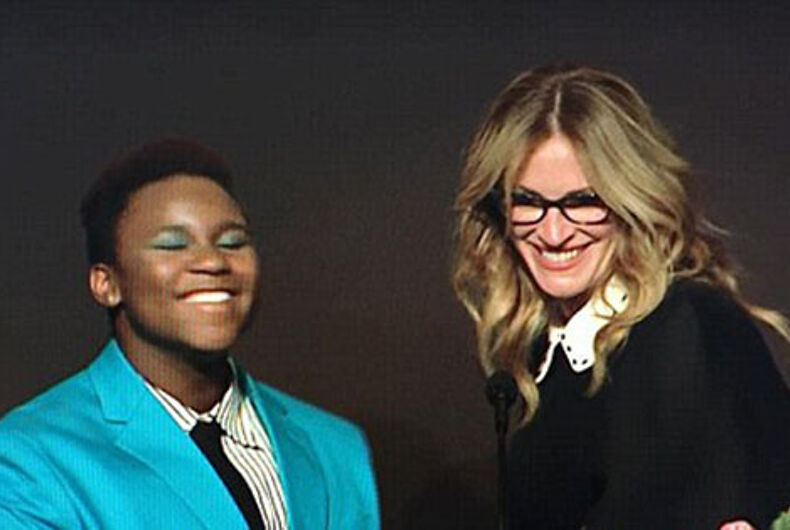 Miguel Johnson is only 16 but he made a lasting impression on Hollywood’s Pretty Woman, Julia Roberts. The gender fluid teen met the Oscar-winning actress last fall at the GLSEN Respect Awards, and now Roberts is speaking out to support him and all LGBTQ youth.

“I had the pleasure of presenting with Miguel at last year’s GLSEN Respect Awards,” Roberts said in a statement to People magazine. “Miguel, like all the students I meet there, is smart, kind and incredibly brave to live their life openly and honestly at such a young age.”

As a parent, I want all students to feel safe and protected at school, and I stand with Miguel and trans students across the country. You are loved.

“Before Trump got elected,” Johnson told the magazine, “he always said he was totally for LGBTQ students, because they’re people too and they deserve an education. And then after he got elected, he was basically like, ‘Just kidding, I lied.’ “

Johnson and Roberts spoke to People about the administration’s decision to rescind protections for transgender students nationwide.

Guidelines issued last year by the Departments of Justice and Education, when President Obama was still in office, stated that discrimination against trans students was prohibited by the sex discrimination ban in Title IX of the Education Amendments of 1972. The guidelines instructed schools to let trans students use the appropriate bathroom. While it was not an executive order, the guidelines implied a threat to the funding of schools if they were not followed.

In rescinding the guidelines, the Trump Administration stated that it believes this issue should be decided at the state-level. And that’s a real problem for Johnson.

He lives in a conservative town in Missouri, where state lawmakers are already drawing up legislation that would force students to use restrooms based on the gender that appears on their birth certificates. “Since the rescission of the transgender-inclusive Title IX guidance and introduction of two anti-trans state bills (HB202 & SB98) in Missouri, Miguel’s school has become less supportive and is now signaling potential roadblocks ahead,” said GLSEN Director of Communications Chris Tuttle in an interview with the magazine.

And Johnson blames Trump’s flip-flopping on LGBTQ issues for costing him acceptance in his small town. “The feeling went from, ‘Trump is supporting LGBTQ students, so I should too,’ to ‘Well, if he doesn’t care, I don’t need to either.’