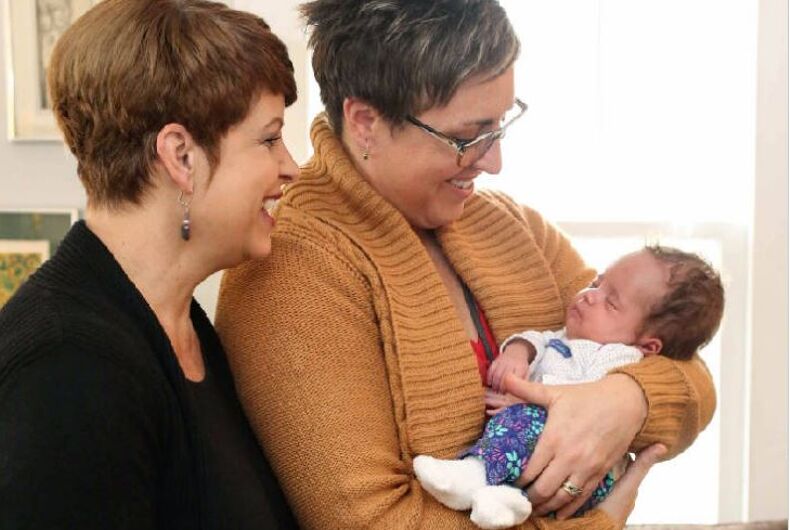 A lesbian couple seeking parental rights had their case heard by a three judge panel for the Seventh Circuit Court of Appeals on Monday, to determine whether or not Indiana’s law disallowing them from both being named on their child’s birth certificate constitutes discrimination.

Jackie and Lisa Phillips-Stackman’s daughter Lola was born from Jackie’s embryo, fertilized by a sperm donor, and carried by Lisa.

The state of Indiana is appealing an earlier ruling by a district judge, who sided with the couple, ordering the state to recognize both women as parents on the birth certificates of children conceived through a sperm donor.

“In our view, that order creates an inequality that did not exist before and undermines the rights of biological fathers and their children,” said Indiana Solicitor General Thomas Fisher.

Judge Diane S. Sykes, who was on Trump’s shortlist of potential Supreme Court nominees, argued that the couple’s lawyer, Karen Celestino-Horseman, was making an argument that wouldn’t hold up to the scrutiny of state law, which is tied to a definition of biological parentage.

“You can’t overcome biology,” Sykes said, Indy Star reports. “If the state defines parenthood by virtue of biology, no argument under the Equal Protection Clause or the substantive due process clause can overcome that.”

“Your Honor, with all due respect, we maintain that parenthood is no longer defined by biology,” Celestino-Horseman responded.

“That’s a policy argument to take to the legislature,” Sykes shot back.

It didn’t get any better from there, either.

“It’s not a parenthood statute. It’s a paternity statute,” the judge added. “Paternity presumption is impossible in a same-sex marriage situation. So we just don’t have any kind of discrimination going on here at all.”

The couple’s lawsuit claims there is a disparity in the law, as in opposite-sex relationships, men are allowed to claim paternity even if the child was conceived using a sperm donor, but the state says couples are not supposed to do that either.

“That led me to think that your argument is that a state law becomes unconstitutional because people subject to the state law don’t follow it,” said Judge Frank H. Easterbrook. “Which would be a very difficult position to take.”

Easterbrook added that the case was attempting to require “a mis-recording of who the father is.”

“Your view seems to be that it is unconstitutional for Indiana to correctly record the parent,” he said.

When asked about how the case could be read concerning same-sex male couples, Celestino-Horseman noted that the situation there would be more complicated, as it would require surrogacy. She added that that wasn’t part of her case.

“We can’t ignore the logical implications of your arguments. And you seem to want to,” Easterbrook told her.

Audio of the oral arguments is available online. The Seventh Circuit is taking the case under advisement and may issuing a ruling at a later date.