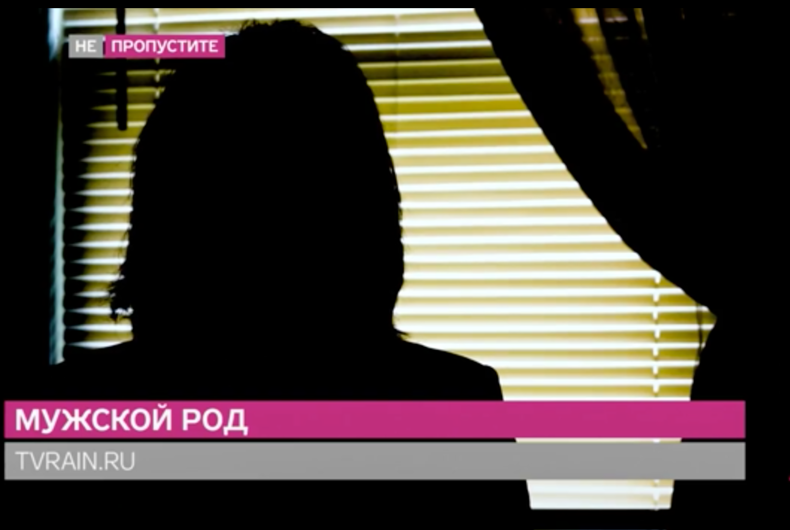 A Chechen transgender woman describes the violence that made her flee Russia for the United States.Photo: Rain TV

As the death toll rises in the killing of gay and bisexual men in Chechnya, one transgender woman is opening up about the violence that drove her to flee Russia for the United States.

In a video interview with Russia’s Rain TV, “Leila” described being threatened with death and stabbed on the street. When she was still in Chechnya, she wasn’t living openly as a woman but was able to get by as “an unusual man,” Gay Star News reports.

“He was a nice man, and there was no negative feeling towards me from him that I noticed,” Leila said. “Even though I had plucked eyebrows and it was clear that I stood out from the crowd.”

But once she moved to Moscow and underwent gender confirmation surgery, Leila began to face threats and violence that she said originated in Chechnya. She added that her relatives were urged to kill her, or else: “Either you remove this man who offends all Chechen society by their very presence, or we’ll find you and bring the body,” Pink News reports.

In 2015, Leila was stabbed on the street by an attacker she said was Chechen. The assailant allegedly asked her: “When will you stop disgracing your people?”

Leila’s story echoes that of gay and bisexual men in Chechnya, who have shared that families are encouraged to kill their LGBTQ relatives out of “honor,” and to prevent them from being captured or killed by authorities.

She finally escaped Russia in 2016. While Leila said she initially planned to settle in Argentina, when her attackers caught wind of her plans, she changed course and entered the United States via Mexico. She is currently an undocumented immigrant and received assistance from a Russian charity in leaving the country.

The Russian LGBT Network, which has helped more than 40 gay and bisexual men flee the country, said that the U.S. government has been denying visas to Chechens in the wake of the budding genocide.

Watch the interview below (note: video content is in Russian).

Heartbreak for these 2 dads forced to surrender their newborn daughter