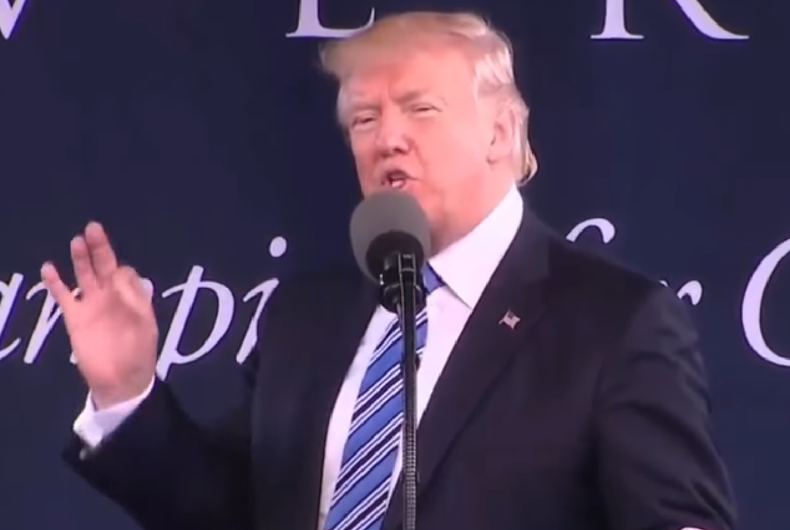 President Donald J. Trump gave the commencement speech at Liberty University in Lynchburg, Virginia, on May 13, 2017. What follows is the transcript of a (fictitious) speech he delivered there, though most of the points the incidents are indeed factual.

Well, anyway. Dear graduates of 2017, faculty, staff, and administrators of Liberty University, which was founded by one of my ultimate and most beloved mentors and heroes, the honorable moral Christian crusader, Jerry Falwell Sr.

Imagine a young child watching the communist-inspired children’s television program Teletubbies. You are introduced to the newest cast character, the subversive purpled-bodied, triangle-headed, Tinky Winkie. We as a country indeed owe a great debt of gratitude to your founding father, Jerry Falwell Sr. He was the first to unearth the plot by militant homosexuals to recruit our impressionable youth into their deviant gay lifestyle by using this purple pervert who carried a bright red handbag, and is a homosexual role model.

Also, we never would have known the true words behind the acronym “NOW.” He was correct by alerting us that NOW, rather than standing for “National Organization for Women” as feminists purport, actually stands for “National Order of Witches.”

He also exposed reality when he announced: “I listen to feminists and all these radical gals – most of them are failures. They’ve blown it… Feminists hate men. They’re sexist. They hate men – that’s their problem.”

And just imagine a world without Jerry Falwell Sr. It was Jerry who courageously uncovered the real criminals behind the historic terrorist attacks on September 11, 2001, inside our true God-fearing country when he said, “…pagans, and the abortionists, and the feminists, and the gays and the lesbians who are actively trying to make that an alternative lifestyle, the ACLU, People For the American Way, all of them who have tried to secularize America.”

I don’t know about you, but I can’t even imagine such a world without Jerry Falwell Sr., this remarkable televangelist alerting us to the truth.

Thank you Jerry for your wise words of wisdom, but enough about him. This commencement is about me.

I want to tell you all here and now in front of this packed audience, I want to tell you that now in my honored and privileged position as President of the United States, you’re going to see “Merry Christmas” in department stores, and no more of this pansy politically correct “Happy Holidays” stuff. As President, I now declare victory in the war on Christmas that liberals and other creepy multiculturalists have been waging in our Christian nation. I won, they lost!

I’m telling you here and now something that you already know: Christianity is under siege, and we have to band together to defend ourselves from the infidels in the United States. I want you to understand that the United States of America is now under my great and inspiring leadership. I am smart. I am rich. I am powerful, and I know how to get things done. I and only I can do it!

Imagine our liberty and how free we will be as individuals and as a nation when the upper 10% (mainly of white families) of our population controls even more than the approximately 80-90% of the accumulated wealth and 85% of the stocks and bonds that they already control. And imagine when corporate executives, who currently pay lower tax rates than their secretaries, pay even less in taxes. And also imagine when I, with Congress, outlaw labor unions and eliminate the government-imposed minimum wage.

Imagine our liberty and how free we will be as individuals and as a nation when I take back from the estimated 20 million people who now have health insurance for the first time in their lives under the Affordable Care Act, which I dub the “Euro-Socialist-inspired” Obamacare.

As President, I will return us to the good-old days when 50 million people in our country went uninsured and their only form of health care was the hospital emergency room that the remainder of the population had to pay, a time during those bygone days when young adults could not remain on their parents’ health plans until age 26, when insurance companies could deny people coverage for preexisting medical conditions and could drop people when they became sick.

I will return us to a time when women had to pay higher insurance premiums than men, when companies could make unjustified rate hikes whenever they wanted, and limit peoples’ rights to appeal company decisions regarding their benefits. Now that’s real liberty. (enormous applause from audience)

As President, I also promise to rescind Comrade Obama’s stated policy of providing free junior college tuition to students. I guarantee never to increase governmental student assistance programs, which I hope will further restrict deserving students from middle and working class backgrounds. Also, imagine when I cut and eventually eliminate governmental entitlement programs, thereby drying up the support systems from the “takers,” including many of our elders, people with disabilities, and other residents sitting on their butts in front of the TV.

Imagine our liberty and how free we will be as individuals and as a nation when I enact an executive order and encourage our Congress to pass legislation to build a wall on our southern border paid for by Mexico, when I further increase deportations and dump people in the middle of oceans and continue to restrict immigration and social and educational services to youth, and most importantly, when the courts finally let me prevent Muslims from entering our Christian country. (loud sustained applause from audience with standing ovation)

Also imagine when I declare English as the “official” language of our entire nation, thereby eliminating bilingual education and mandating that all government documents be written in only good old English – the American language. It’ll be a yuuuuuge victory!

Imagine our liberty and how free we will be as individuals and as a nation when I re-criminalize women who attempt to control their bodies, and when doctors and others assist them in carrying out the choices they make. (loud sustained applause from audience with standing ovation)

Imagine our liberty and how free we will be as individuals and as a nation when I overturn those laws that spit in the face of God by allowing homosexuals to marry each other, and other laws granting them the benefits of living where they wish, eating in restaurants and purchasing things in stores they wish to patronize, visiting their so-called “partners” in hospitals and attending their funerals, inheriting their partners’ stuff after they die, and all the other benefits that should only be granted within the sacred bonds between one man and one woman.

If you want to hear about how sacred I take the marriage vows, you can ask all three of my wives!

And imagine when we return to the days when men were men and women were ladies, because now, I already outlawed transgender students from entering the bathroom of their choice, and I will make it harder to have transition procedures. And returning to the good old days of the mid-20th century, I will mandate that everyone wear the clothing of their sex and behave as our God had intended.  (“amen” coming from throughout the crowd)

Imagine our liberty and how free we will be as individuals and as a nation when I terminate all so-called “affirmative action programs” that get in the way of hard working righteous white men, for as we well know, as it currently stands, white people, especially white Christians, and heterosexuals are the real victims of our current Nanny State big government.

Imagine our liberty and how free we will be as individuals and as a nation when I assist Congress in privatizing our national parks, and loosening environmental and consumer protections of all kinds. I will grant even more mining, oil, and lumber companies an enhanced right to exploit the land, and grant them more enormous tax breaks and subsidies. I promise to expose the lie that the liberals perpetuate daily in their claims of some sort of human-caused climate change and the warming of the Earth. As we all here know, God can only change our climate.

Imagine our liberty and how free we will be as individuals and as a nation when I downsize government by eliminating the Internal Revenue Service, the Department of Education, the Department of Energy, and the Environmental Protection Agency, as well as many other agencies during my term in office.

Imagine our liberty and how free we will be as individuals and as a nation when we divert money currently going into public education into school vouchers so parents can send their students to good Christian schools at tax payer expense. And imagine when we reintroduce prayer into the public schools, and when the current pretext of a supposed separation of religion and state is finally exposed as the heresy it is.

Imagine our liberty and how free we will be as individuals and as a nation when I can conduct invasions into sovereign nations to bring about American-style democratic reforms and restore civility. Look out, Iran and California!

So, I ask you all here today, don’t merely imagine an America with more liberty and freedom through a peewee size government with severely reduced public services, an unlimited defense budget, enhanced state rights and the ability for states to secede anytime they wish, and a return to the true God. Now that I am your Divine Commander-In-Chief, that is exactly what you will get.

So to you graduates, I say, good luck and God bless you, God bless Jerry Falwell Sr. and Jr., and God bless the Christian Theocracy of the United States of America.

Drama about ACT UP gets best reviews at Cannes Film Festival