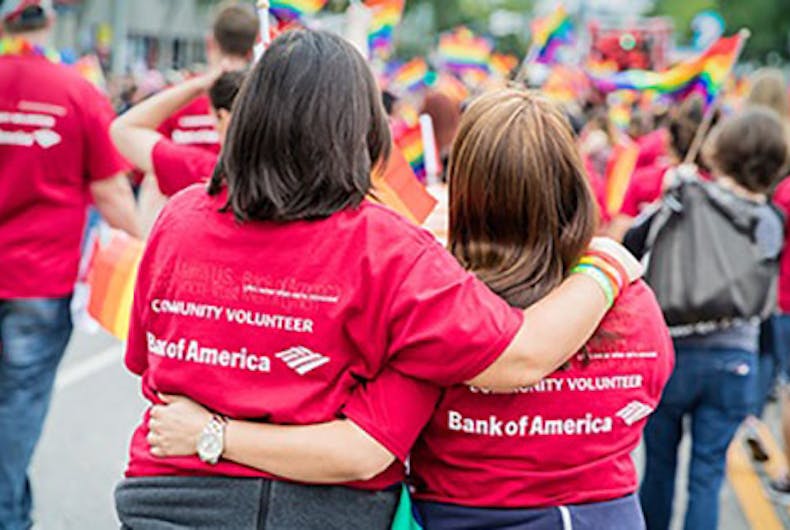 Bank of America has just been slut-shamed by the leading gay, lesbian, bi and trans rights advocates in the nation, for getting caught talking behind their backs with their fiercest enemies.

Human Rights Campaign is rejecting $325,000 in corporate sponsorships and demoting the top-ranked bank in North Carolina — five times bigger than its nearest rival and competitor for LGBTQ consumers, Wells Fargo — in its Corporate Equality Index, reported the Charlotte Observer. It’s punishing Bank of America for its managers’ role in negotiating the fake repeal of House Bill 2 with Gov. Roy Cooper and North Carolina Republicans.

“Bank of America and BCBS NC actively participated in brokering a law that will extend discrimination against countless LGBTQ people across the state of North Carolina – with particularly significant and permanent harm to transgender people,” Deena Fidas, director of HRC’s Workplace Equality Program, said in a statement.

Andrea Smith, the bank’s chief administrative officer, and Charles Bowman, the North Carolina market president, were part of a small group of business leaders who helped negotiate the passage of HB142 in March, which Gov. Cooper swiftly signed into law.

A spokesperson for HRC says the organization has returned $25,000 to the bank and plans to forego a commitment of another $300,000. Although it still includes past statements of support by Bank of America and consumer information about the bank on its website, the bank is now missing from its list of national corporate sponsors and even a page offering supporters an opportunity to apply for an HRC Visa card has been disabled.

“We support LGBT equality and will continue doing so despite HRC’s decision, which does not reflect our long record of leadership,” Bank of America spokesperson Lawrence DeRita said in a statement.

Being the bank’s hometown newspaper, the Observer carefully noted Bank of America’s prior positive reputation for offering comprehensive domestic partner benefits in the 1990s, including sexual orientation in its nondiscrimination policies and a benefits package that includes “medically necessary treatments” for transgender employees in the U.S.

But that isn’t going to change its CEI score, nor that of Blue Cross and Blue Shield of North Carolina, which HRC punished for the same reason.

The bank boasts about its score of 100 for the past decade on its own website, and how HRC recognized the bank as one of the best places to work in terms of LGBTQ equality.

Now those HRC scores of 100 each for the bank and Blue Cross are down to 75.

The bank’s chief competitor in North Carolina, Wells Fargo, remains at 100, by the way. And its pro-LGBTQ advertising and sponsorships certainly have riled-up conservative Christians like Franklin Graham, who have threatened a boycott. But it’s only fair to point out Wells Fargo is also the bank that opened accounts for customers without their knowledge and rejected another customer’s request for a “Black Lives Matter” logo design for her custom bank card because it was too “political.”