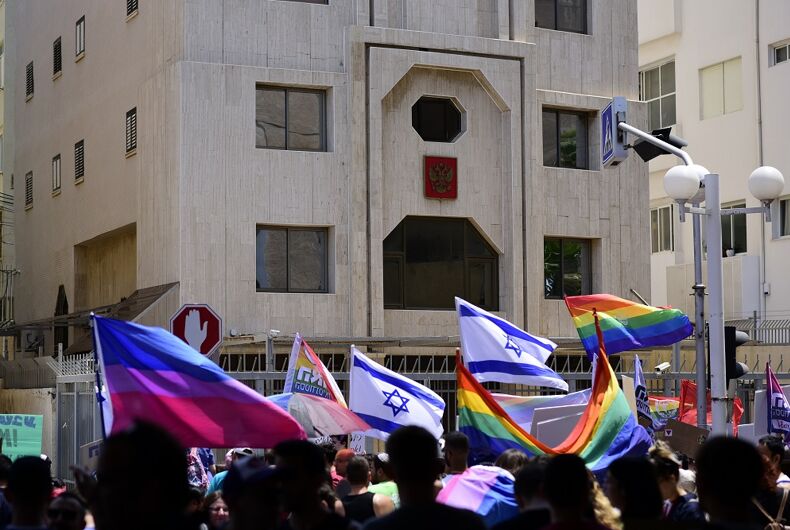 Protestors this weekend outside the Russian embassy in Tel Aviv demanded that the Russian government intervene to stop human rights abuses in Chechnya.Photo: Shutterstock

According to a testimonial in a Russian magazine, a 17-year-old boy was thrown from a 9th floor balcony by his uncle because he was suspected of being gay.

The Russian magazine Snob – a general interest magazine directed at a worldly, upper-middle-class readership – contained several testimonials from gay men who have fled Chechnya for survival in recent years. The men, whose names were not published, described violence against family, friends, and themselves in what one of them referred to as a campaign to exterminate gay people.

Attention in the West was drawn to homophobic violence in Chechnya last month when Novaya Gazeta published an article about secret prisons where gay and bisexual men were being tortured and killed. The testimonials, though, describe horrific incidents going back to the 1990’s in the Russian Federation member nation.

One of the men who talked to Snob described how a boy was killed by his own uncle for being gay.

In 2009, a 17-year-old boy fell out of the balcony of the ninth floor in a house near the place where my family lived. At the time, the whole district said that he was stoned, high, how bad young people are today, hard-core drug addicts. It was six months before I accidentally found out that the boy was gay, and when his family found out about it, they decided to kill him, in order to thus washing away the stain of shame from the family. But neither the father, nor the mother, nor the brothers could do this, so his uncle killed him. He dragged him to the ninth floor and pushed him.

The man who told that story was beaten daily by his brothers until he showed up at his mosque one day with a bruised face. The imam asked him what happened, and he explained that he was beaten because he was gay.

The imam replied that violence was unacceptable, “but as a Chechen and as a man I do not want to see you here. Not in the mosque, not in this region. I want you to leave now, because what you said is the most disgusting thing one can hear. I hope your relatives have the dignity to wash away your shame. Go away.”

After his brother tried to kill him, he escaped to St. Petersburg.

Another testimonial from a man who called himself the “Godfather” of the local gay scene in his town describes how he was hounded by police who obtained text messages he sent to other gay people and how he had to bribe them to survive until he could flee Chechnya. He says that he is still trying to find a way to turn straight. “I hate myself this way. Not only myself, I hate all gays. I hate those who want gays to live free. What freedom, what gay parade in Chechnya, if there are not even Russian laws?”

Right wing pundits: Queen Elizabeth is a lizard & Hillary is a dead cannibal