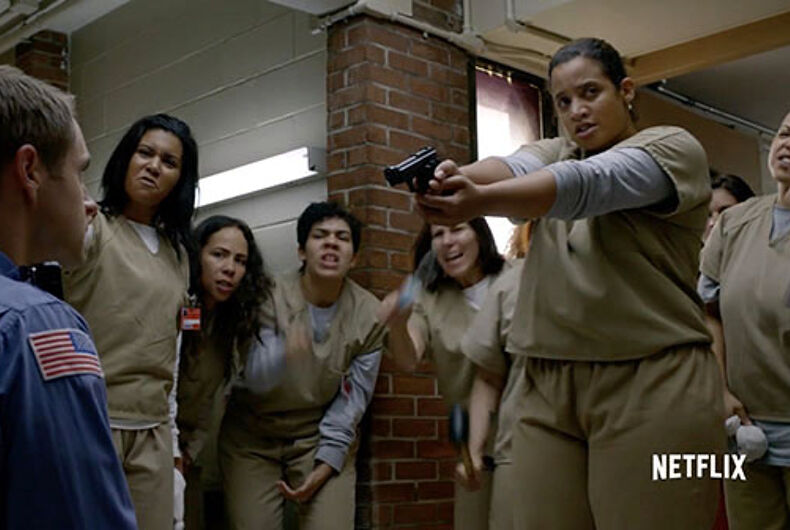 An extortion threat to Netflix and several broadcast and cable TV networks is the talk of Hollywood Monday, and could mean fans of Orange Is The New Black get to see season 5 of the hit series sooner than expected.

An anonymous hacker who goes by the Twitter handle @thedarkoverlord leaked the episodes that were scheduled to drop June 9 to a pirate file-sharing site, The Pirate Bay.

Variety reported that thedarkoverlord made good on the threat after Netflix allegedly failed to respond to the hacker’s shakedown demands.

The cybercriminal is somehow connected with a group of hackers who go by the name TDO, reported Torrent Freak, which broke the story. TDO demanded 50 bitcoins and warned it would levy late fees for not meeting payment deadlines, as per a written contract obtained by Torrent Freak.

According to the report, the hackers stole the episodes — possibly before they were finished — from a computer at a dialogue recording house called Larson Studios.

“After we had a copy of their data safely in our possession, we asked that we be paid a small fee in exchange for non-disclosure,” a member of the group told Torrent Freak. “We approached them on the Eve of their Christmas.”

TDO claimed executives at Larson Studios not only agreed to the pay the ransom, they even sent back the contract.

“They printed, signed, and scanned the contract back to us,” the group told TF.

In a statement Friday, Netflix said: “We are aware of the situation. A production vendor used by several major TV studios had its security compromised and the appropriate law enforcement authorities are involved.”

The hacker issued a new threat via Twitter to those other TV networks:

“It didn’t have to be this way, Netflix,” thedarkoverlord said in its response to the streamer’s statement. “You’re going to lose a lot more money in all of this than what our modest offer was,” the hacker said, then adding snark. “We’re quite ashamed to breathe the same air as you. We figured a pragmatic business such as yourselves would see and understand the benefits of cooperating with a reasonable and merciful entity like ourselves.”

Variety reported it’s possible that Netflix will now move up the premiere date of its most popular series, given that the bulk of the OITNB episodes have already leaked.

Can using meth regularly give you a mental illness?