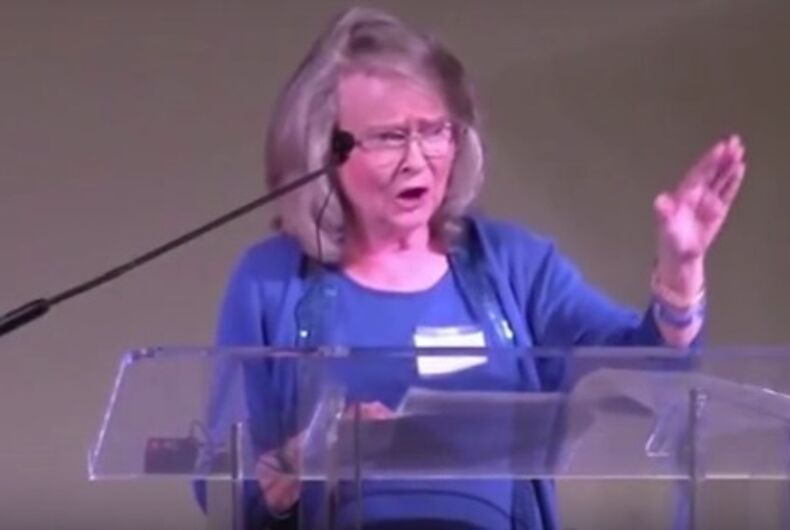 Sharon Armke really wanted to be a school principal, but when her extreme anti-LGBTQ views became known, Texas State University denied her certification in the master’s program. Of course, now Armke has hit the religious right speaking circuit, claiming she’s a victim of the “LGBT agenda.”

Armke’s latest public appearance at a “pro-family conference” sponsored by the Texas chapter of the hate group MassResistance comes complete with all the usual complaints about tolerance and chest beating over “religious freedom,” but the would-be school administrator proved why she wasn’t capable of protecting a diverse group of students.

“They intend, and they are very successful so far, in brainwashing our children to believe that sodomy is right and good,” she told the gathering. “We are trying to show parents what is happening to our children and, excuse me if I say this, we should be screaming bloody murder in the streets. We should be screaming bloody murder in the street. This is not right! … Those teachers that do this, that teach sodomy to little children, many people call them child abusers and I agree.”

“I learned the hard way the true agenda of the radical left, it’s domination of our children and our culture,” Armke continued. “Sixth graders are now deciding they are homosexual and I’m just asking a question: how can a child who doesn’t even have proper hormones yet know if they’re homosexual unless they’ve somehow been abused already?”

In the end, Armke got so upset over the gayz that she burst into tears and had to leave the stage.

“May God have mercy on us,” she sputtered as she left the stage.

Did the White House put the kibosh on humanitarian honor for Jimmy Carter?