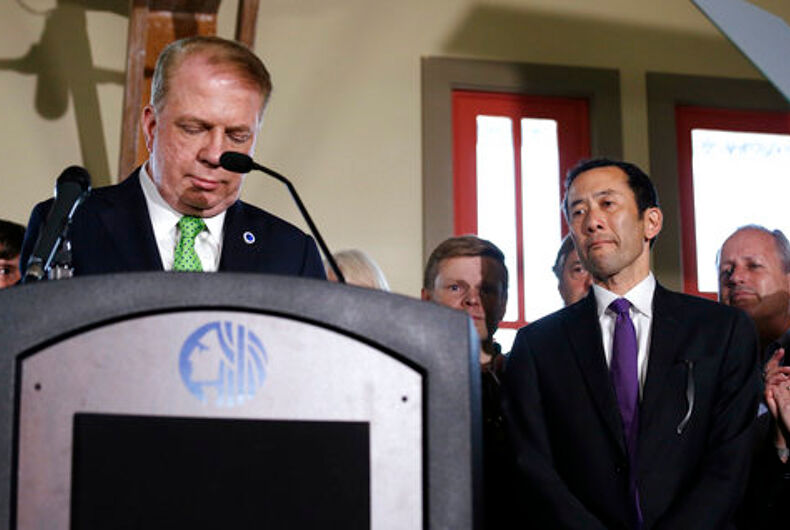 Seattle Mayor Ed Murray, left, reads a statement to media and supporters, as his husband Michael Shiosaki, right, looks on, saying that he is dropping his re-election bid for a second term Tuesday, May 9, 2017, in Seattle. Last month a man filed a lawsuit claiming he was sexually abused by Murray in the 1980s when he was a teenager. Three others made similar allegations, and all were vehemently denied by Murray.Photo: (AP Photo/Elaine Thompson)

Seattle Mayor Ed Murray on Tuesday dropped his re-election bid after four men claimed he sexually abused them when they were teenagers, allegations Murray vehemently denied as an anti-gay political conspiracy aimed at derailing his campaign.

Murray for weeks pushed ahead for a second term despite the allegations but told reporters he decided it would be best for the city for him to abandon his campaign. He said he will serve out his term through the end of this year.

“It tears me to pieces to step away but I believe it’s in the best interest of this city that I love,” said Murray, 62, flanked by his husband and tearful supporters.

Murray reiterated his denial of the allegations that first emerged last month when a man filed a lawsuit claiming Murray paid him for sex in the 1980s. Three other men also came forward with similar allegations, including one who is jailed on drug charges.

“The allegations against me are not true,” Murray said. “And I say this with all honesty and with the deepest sincerity. But the scandal surrounding them and me is hurting this city.”

He has previously claimed the allegations were part of an anti-gay conservative campaign to oust him, but Murray did not repeat those accusations during his speech. Several of the accusers have said they are gay but were not involved in politics.

Murray, a Democrat, said he was proud of accomplishments including raising Seattle’s minimum wage to $15 and called his term “the absolute, absolute opportunity of a lifetime.”

But the mayor, a former longtime state lawmaker, said the mayoral race should be dominated by issues important for Seattle instead of a scandal.

Murray was the favorite to win before the lawsuit emerged in early April, with community activist and lawyer Nikkita Oliver his highest-profile challenger. But others have since jumped into the race, including former Seattle Mike McGinn, who Murray beat in 2013.

State Sen. Jamie Pedersen, a Democrat, said after Murray spoke that “we’ve lost somebody as a leader in the community who has accomplished an amazing amount of good.”

Before winning the city’s top job, Murray served for 18 years as a state lawmaker.

He was the prime sponsor of Washington’s gay marriage law, spearheaded an effort to protect LGBTQ youth in public schools and led the state’s push to ban discrimination based on sexual orientation.

He recently announced Seattle was suing over Trump’s executive order that threatens to withhold federal funds from communities that refuse to cooperate with efforts to find and deport immigrants in the country illegally.

Delvonn Heckard, the man who filed the lawsuit against Murray, believes the mayor’s decision to drop his re-election bid “is one step towards justice and achieving (Heckard’s) cause of spreading truth,” his lawyer said in a statement.

The Associated Press does not typically name alleged victims of sex abuse but Heckard has said he wanted his identity made public.

Murray grew up in working class neighborhoods in and around Seattle and eventually became one of the state’s most prominent political figures.

As a young man he considered joining the priesthood and spent a year at a seminary in 1976 before studying sociology at the University of Portland, a private Catholic institution.

Murray worked as a paralegal with public defender lawyers in Portland before returning to Seattle and joining the vanguard of the gay rights movement in the 1980s.

He served as campaign manager for Cal Anderson, a Seattle state senator who was the Legislature’s first openly gay member.

He became a state lawmaker after he was appointed to fill the legislative seat of the state representative who won the state senate campaign.