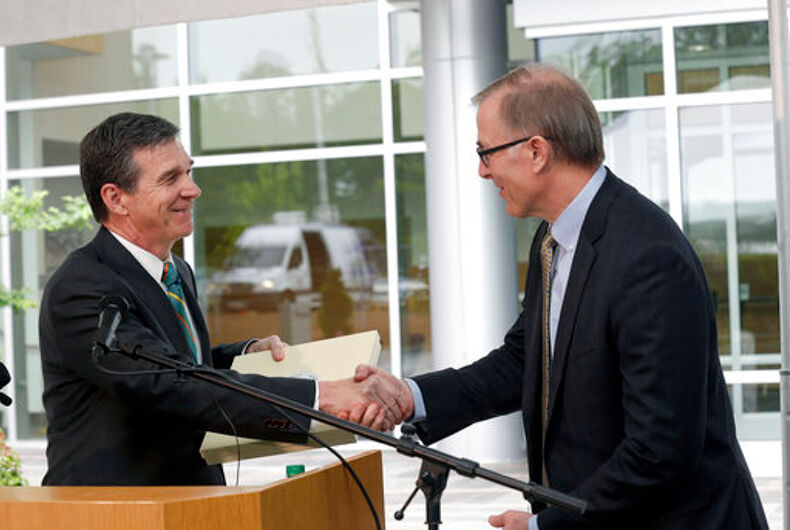 Credit Suisse announced 1,200 more jobs for its North Carolina technology hub on Tuesday, saying a partial repeal of the state’s law limiting the rights of gay and transgender people does just enough to satisfy its need to attract top workers.

North Carolina also approved more than $40 million in tax breaks Tuesday to lure the jobs away from the New York City area. But if House Bill 2 had still been in effect, the Swiss bank said it could not have committed to expanding in the state.

“We opposed that law. During the period that HB2 was on the books, we had to put our plans on hold. We did not think that expansion could be done in a way that was consistent with our core values,” Credit Suisse Vice Chairman Wilson Ervin said.

The compromise Democratic Gov. Roy Cooper reached with the state’s Republican-led legislature five weeks ago left many critics unsatisfied. Some called it a ploy to end the boycotts, because local governments still can’t protect people from discrimination over sexual orientation and gender identity. State lawmakers also put themselves firmly in charge of bathroom policies.

Still, Ervin called it “an important first step that re-establishes the minimum conditions for us to expand in the state.”

The governor, who joined the news conference, said he’s sure the compromise will encourage other companies to revive their own expansion plans.

“There’s no question that it will,” Cooper said. “This was an important first step for our state. We still have more to do. We’re glad to have these good paying jobs in our state.”

The Swiss bank is reorganizing operations and sharply reducing its workforce after two years of losses, cutting up to 6,500 jobs this year after slashing its overall headcount by 7,200 last year.

The bank had also considered the jobs announced Tuesday for Jersey City, New Jersey, according to documents reviewed by the state committee which approves large, discretionary tax breaks. With community college training and local sweeteners, Credit Suisse could get benefits of up to $44 million related to its North Carolina jobs.

The jobs moving from the bank’s New York-area site or newly created in lower-cost North Carolina will include information technology, cyber-security, machine learning, finance, and other corporate functions, and pay an average salary of more than $100,000 a year.

The bank’s jobs shift represents North Carolina’s largest corporate expansion since MetLife Inc. said in 2013 that it would move 2,600 jobs from other states.

Credit Suisse decided after the 2001 terrorist attacks to move some vital back-office operations away from New York City. The Zurich-based bank now employs about 1,700 people at its operations in the tech-heavy North Carolina metropolitan area that includes the university towns of Raleigh, Durham and Chapel Hill.

The company in 2004 announced it was investing $100 million in a support and information technology center for its investment banking division. The Research Triangle Park location also includes some finance professionals.

Credit Suisse lost 2.44 billion Swiss francs (US$2.42 billion) last year, but reported a return to profit in the first quarter of this year at 596 million francs (US$594 million) on the strength of a surge in its wealth management business.

The bank also has U.S. operations in Chicago, Houston, Los Angeles and San Francisco, and employs more than 45,000 in 50 countries focused on banking, investing and finance.