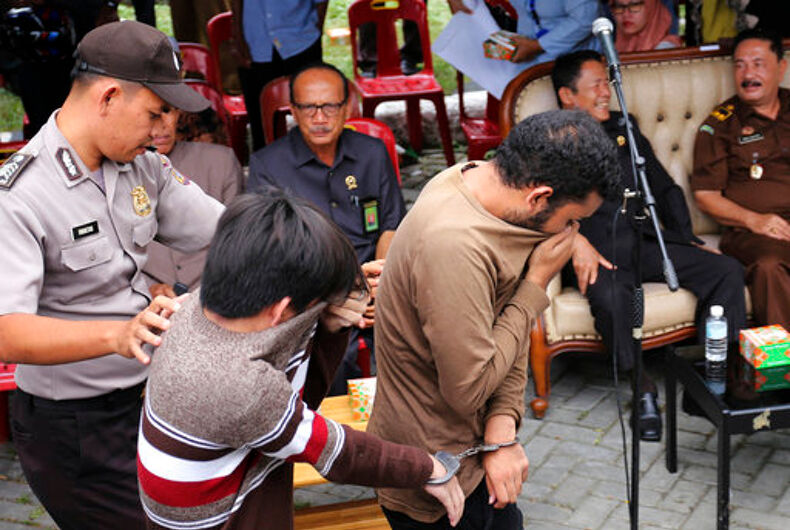 A police officer escort two men convicted of gay sex to be publicly caned at a mosque in Banda Aceh, Aceh province Indonesia, Tuesday, May 23, 2017. The two men were publicly caned dozens of times Tuesday for consensual sex, a punishment that intensifies an anti-gay backlash and which rights advocates denounced as "medieval torture." Photo: AP Photo/Heri Juanda

Two gay men in Indonesia have been publicly caned after vigilantes got them arrested in the country’s only province where homosexuality is illegal.

It is the first public caning of gay men in Indonesia, where federal law has never criminalized homosexuality, but where anti-LGBTQ animus is on the rise.

The men were arrested after vigilantes in their neighborhood barged into the apartment where they were staying and filmed them naked in bed. The video not only led to their conviction and sentencing to 85 lashes, it was reportedly shared broadly on social media.

“These young men are two Indonesians who wanted nothing more than to live their lives and have their privacy respected,” Kyle Knight from Human Rights Watch wrote last week.

In the conservative Aceh province, a strict form of Sharia law reigns; after decades of separatist conflict, Indonesia permitted the province to follow Sharia law. According to international law, caning is considered a form of torture.

More than 3,000 people gathered outside the Syahuda mosque to watch the men get caned, with some shouting “Let this be a lesson to you,” and “Do it harder.”

One of the gay men about to be caned in Aceh. pic.twitter.com/MQVIZHbJd6

A reporter from the BBC was granted an interview with one of the men, who said he just wants the nightmare to end.

“I just want the caning to be over and to go back to my family, I have been deeply depressed. I am trying to pull myself out of a deep black hole,” he said.

The reporter described the experience:

I met one of the young men in jail a day before the caning, the first journalist to speak to him. He was terrified and his whole body was shaking. He was thin, pale and had a red rash on his skin.

Inmates surrounded us with intimidating glares as we tried to talk. I thought we were going to be speaking in a private room, but he was not granted that.

Before neighbourhood vigilantes broke down the door to his rented room, he was in his final years of a medical degree – his plan was to be a doctor. Now we are told the university has kicked him out.

Videos of the raid that caught him and his partner having sex have been widely shared online. In the mobile phone footage they are both naked, pleading for help.

Homosexuality has been illegal in Aceh since 2014, but officials in other parts of Indonesia appear to be using allegations of other crimes to round of up gays.

More than 140 men were recently arrested at a sauna in Jakarta popular among gay men. They were detained on suspicion of violating pornography laws, a common ploy to ensnare gay people — but not before police took photos of the men that were subsequently published on social media.

Texas’ bathroom bill would out trans students to their classmates