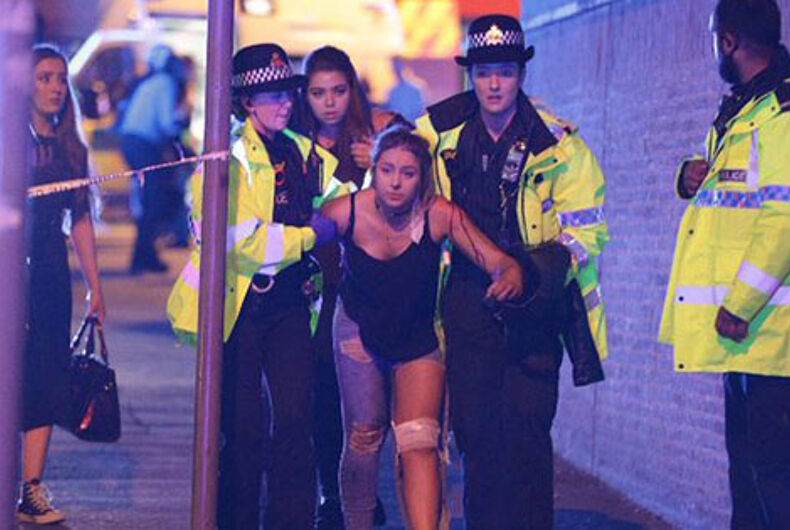 Editor’s note: This story has been updated to reflect new injury and deaths reported by British police.

An explosion that police said was linked to terrorism killed 22 people and wounded dozens of other concertgoers at an arena performance by LGBTQ ally Ariana Grande in Manchester, England Monday night.

Police said the explosion is being judged a terrorist attack unless new information proves otherwise.

“We saw young girls with blood on them, everyone was screaming and people were running,” she said. Video posted to Twitter showed panicked concertgoers running from the arena.

”Ariana is O.K.,” said her publicist, Joseph Carozza. “We are further investigating what happened.”

Many parents were separated from their children during the chaos. Some families turned to Twitter in hopes of finding their loved ones.

One witness told the BBC the “whole building shook,” that there was “carnage everywhere,” and that the explosion appeared to come near the stadium’s ticket area.

She said there was no smoke, just one very loud bang. “It was very, very loud,” she said, adding that her husband thought he had heard a second explosion. “There were shoes on the floor,” left behind by people who had fled, she recalled.

“Just chaos,” she said. “I was trying to tell people to calm down.” She added that the crush of people trying to flee created a perilous situation: “We were being crushed.”

This is a developing story. Bookmark this page for further developments.