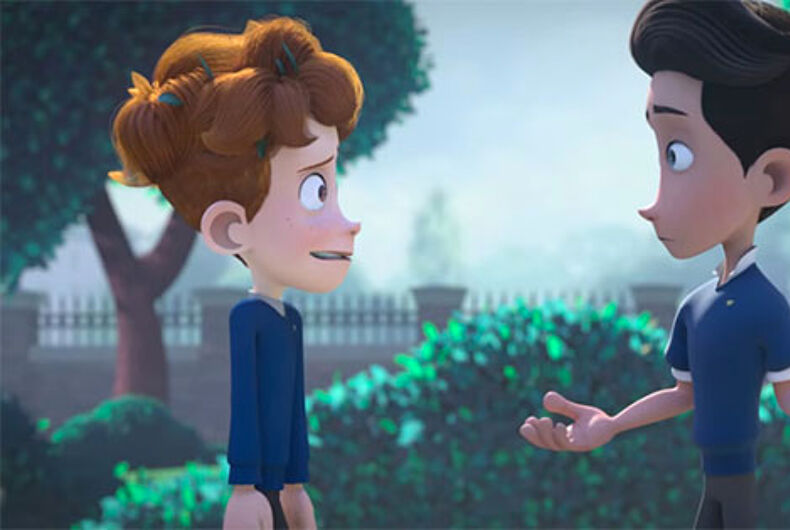 Poor Sherwin. He simply adores his classmate Jonathan, but he’s in the closet and doesn’t dare tell him — or anyone — he’s got a crush on the most popular boy in school. But his heart has other ideas: it bursts from his chest and chases down the boy of his dreams.

That’s the premise behind In A Heartbeat, an animated film by Beth David and Esteban Bravo at the Ringling School of Art and Design that is currently in production. The film students released the trailer last week via YouTube, Kickstarter and Instagram.

Our trailer for "In a Heartbeat" is out! Check it out! (Link in bio) 💙 #inaheartbeat #computeranimation #animation #gayfilm #gay #lgbt #lgbtfilm

“This film is not only a culmination of our four years of education and hard work at the college, but also an expression of a subject that has not been explored in computer animation,” the computer animation majors explain in their online fundraising campaign. “It’s a film that deals with a real and personal topic in a very sweet and lighthearted way.”

David and Bravo hoped to raise $3,000 to finish their film but have already far exceeded their goal with more than $14,000.

“Nine out of ten LGBT youths have reported incidences of bullying based on their orientations and identities,” Bravo said, according to Gay Star News.

“We want to put out a message of love and self acceptance to all the kids and young people who struggle to identify as LGBT+,” added David, “just like Sherwin does.”

Cannes jury acts up for gay, bi men in Chechnya