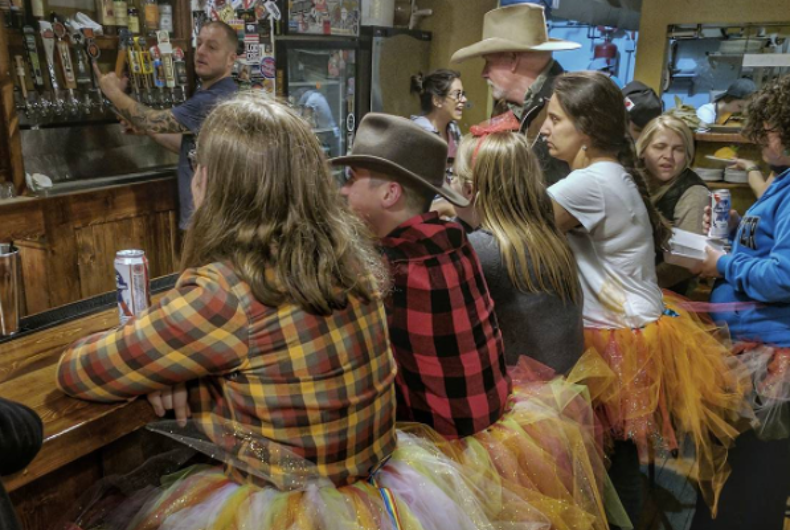 Supporters of LGBTQ equality wore tutus across Wyoming Friday to protest Sen. Mike Enzi’s comment that men who wear tutus into bars are asking to be assaulted.

“Honestly, this is what we do in Wyoming. Straight men all over the state are going to be joining their LGBTQ siblings and wearing tutu’s, buying their queer friends drinks and having a great time,” Equality Wyoming’s Sara Burlingame wrote. “It is a great time to be in the Equality State where we talk out differences and show up for each other — with or without tutus.”

I love these men 😄😍 #liveandlettutu

For Wyomingites, Enzi’s anecdote wasn’t random. It instantly called to mind Wyoming resident Sissy Goodwin, a retired professor and well-known crossdresser whose story has been featured by media outlets like NBC and The Washington Post. Though Goodwin technically wears petticoats, the unfamiliar could easily confuse the two voluminous skirts.

Goodwin donned a bright green and yellow petticoat when he joined participants in a statewide protest dubbed #LiveAndLetTutu, after the state’s “live and let live” culture.

Meanwhile, in Goodwin’s hometown of Casper, a place called Butch’s offered patrons free drinks if they wore a tutu, and showed support for their local celebrity with the hashtag #WeHaveSissysBack.

Enzi made the controversial comment when a student journalist asked him about LGBTQ rights.

“We always say that in Wyoming you can be just about anything you want to be, as long as you don’t push it in somebody’s face,” he told students from Greybull High School and Middle School. “I know a guy who wears a tutu and goes to bars on Friday night and is always surprised that he gets in fights. Well, he kind of asks for it. That’s the way that he winds up with that kind of problem.”

The senator later apologized for his choice of words on Tuesday.

“I regret a poor choice of words during part of my presentation,” he said. “None of us is infallible and I apologize to anyone who has taken offense. No offense was intended. Quite the opposite in fact, and so I ask for your understanding as well.”

But Enzi also issued an apology directly to Goodwin, while insisting that Sissy was not the person he was referring to in his anecdote.

“As many people thought that Sen. Enzi was referring to Mr. Goodwin, he wanted to make sure that he apologized to him personally,” a spokesperson for the senator told the Casper Star-Tribune. “I understand that Sen. Enzi also clarified that his example was not referring to Mr. Goodwin, or any specific person, and emphasized that nobody, including LGBT individuals, should be bullied or feel unsafe.”

Goodwin said he accepted the senator’s apology and that they had “a nice conversation.”

“He offered an apology and I have no doubt to believe it was genuine,” Goodwin said. “I think we had a respectful dialogue. If anything comes out of this, we both agree that it’s opening a discussion and illuminating the issues to the benefit of everyone concerned.”

Trump’s tax plan is the exact opposite of ‘freedom’