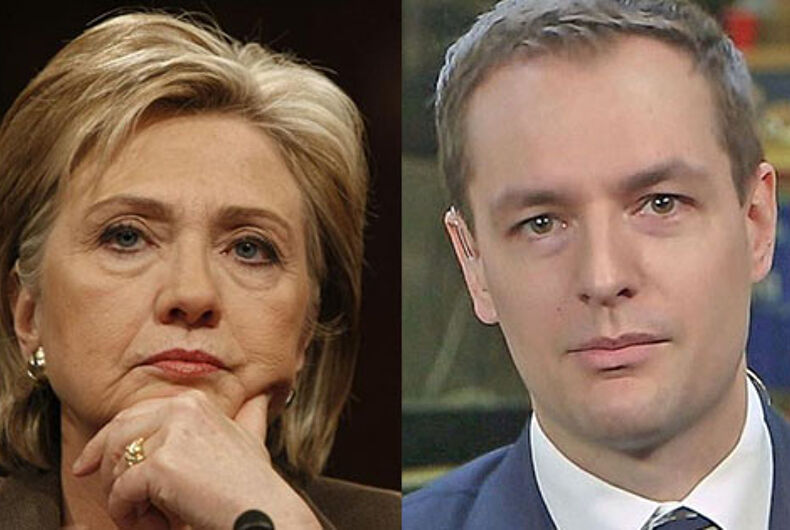 Despite his reputation for running a “drama-free” political shop, openly-gay Robby Mook is the man a new book says is primarily responsible for Hillary Clinton’s historic loss to Donald Trump. The manager of the disastrous campaign made innumerable mistakes, aides say, allowing the widely unpopular and demagogic Trump to score an upset victory. Despite her own misgivings, the authors say Clinton refused to fire him.

“Mook had made the near-fatal mistakes of underestimating Sanders and investing almost nothing early in the back end of the primary calendar,” Jonathan Allen and Amie Parnes write in their chronicle of the Clinton campaign, Shattered.

Mook, the first openly-gay presidential campaign manager in U.S. history, grew up in Vermont with a love for the theater. He is notoriously private, doesn’t engage in social media and rarely gives interviews; although he told the Georgia Voice in July 2016 his sexual orientation was not an issue, he hasn’t talked publicly about how he came out.

Now 37, he got his start at 16, organizing phone banks in New Hampshire for the Clinton-Gore reelection campaign. From 23 to 27 he ran Howard Dean’s failed presidential bid and moved on to help Hillary Clinton defeat Barack Obama in three primary races. And in 2013, he successfully ran Terry McAuliffe’s second attempt to get elected governor of Virginia.

Allen and Parnes portray the young gay data whiz as a “professional political assassin” with a control-freak grip on power, unafraid to threaten anyone who stood in the way. He fights with campaign chairman John Podesta, battles chief strategist Joel Benenson, and disdains communications director Jennifer Palmieri.

Mook pushed voter modeling, analytics and computer models, and clashed with more senior aides who wanted to invest in more conventional polling, field organizers and yard signs. And the author say he is notorious for pinching pennies.

But, as The Washington Post notes, this portrait is skewed. The negative portrayal of Mook “carries the stench of bitter co-workers conveniently tossing after-the-fact blame his way.”

The book focuses more on Clinton’s campaign against Bernie Sanders than on her race to defeat Trump, and Among the fatal mistakes leading up to Election Day, the book claims Mook “declined to use pollsters to track voter preferences in the final three weeks of the campaign,” disregarding the pleas from high-placed workers in crucial states.

It is indisputable that Clinton never set foot in Wisconsin, a key state. Battleground states like Wisconsin and Michigan were taken for granted while the campaign focused on expanding the electoral map beyond Democratic-held turf and traditional swing states, like Arizona. That was, until it was too late.

As The Times put it, Shattered provides an insider look at the “shockingly inept campaign hobbled by hubris and unforced errors, and haunted by a sense of self-pity and doom, summed up in one Clinton aide’s mantra throughout the campaign: “‘We’re not allowed to have nice things.'”

Most interesting to readers will be the very first account of what it was like being in the room as it dawned on the Clintons that they had lost. The White House called Mook to tell him, “POTUS doesn’t think it’s wise to drag this out.”

On election night, as reality began to descend on campaign headquarters in Brooklyn, Mook held fast and counseled the nominee not to concede, even after a call from President Obama himself urged Clinton to do just that.

Then came the moment in the early morning hours after Election Night when Clinton rose to the occasion. “Give me the phone,” she announced. And the next two words she uttered were the ones millions of Americans never thought she’d say: “Congratulations, Donald.”