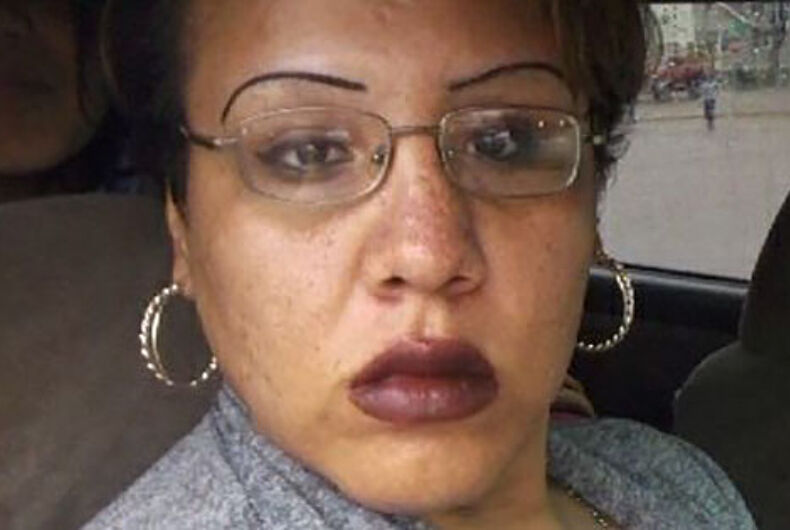 Isabella Red Cloud is a transgender woman of color living in Sioux Falls, South Dakota, who said she was turned away from the only place in town serving a hot meal three times a day to the homeless, impoverished and unemployed.

RELATED: L.A. artist mocks trans Americans by referring to Caitlyn Jenner as “IT” in spoof ads.

Red Cloud, 26, identifies as Two Spirit and is currently unemployed. She wore a dress on Saturday when she visited Union Gospel Mission of Sioux Falls, which is not affiliated with the Roman Catholic Church. Red Cloud said she was told by a man identified only as “Don,” that she had to leave because she was “dressed inappropriately,” and that she could not come back until she “dressed like a man.”

As she was being escorted out, Red Cloud activated the Facebook app on her mobile phone and started a live stream to document what was happening.

“I don’t know a thing about a woman being turned away,” director Fran Stenberg told LGBTQ Nation in a phone interview. “It was a man that was turned away,” he said, and confirmed he understood what the term “transgender” means when informed Red Cloud identifies as a transgender woman.

“What I know about, simply, is that it was a decision that was made, and occasionally we have to refuse service to somebody because they’re disruptive, or whatever. That’s as much as I know about it.”

When asked what was disruptive about this woman seeking food, Stenberg replied that this wasn’t the first time Red Cloud has done this, meaning presenting herself as the woman she is, and that it was her gender expression that caused her ejection:

Stenberg said his mission was acting according to the Bible. “Christianity is dependent on our obedience to God.” It’s interesting to note that on the mission’s website the founder is listed as Thomas F. Morse, a convicted felon who served time for murder.

Red Cloud was released from prison for auto theft in February and is currently a transient, couch-surfing with friends. She says the last time she tried to visit the mission was seven years ago, before beginning her prison sentnce. The incident on Saturday said left her so depressed she said she contemplated suicide; concerned friends came to her aid and offered her love and support.

A small group of Red Cloud’s supporters joined her the next day in a march from the Catholic Cathedral of Saint Joseph to the mission, waving a rainbow flag. and then they attempted to attend Sunday evening services.

This time, “Don,” the same man who ejected her on Saturday, called police to have them removed for trespassing on Sunday.

Red Cloud said they walked past him and were sitting, praying and singing for about ten minutes before police arrived and escorted them out, handing each a trespassing notice that they were required by law to stay off the premises for six months.

A friend of Red Cloud’s recorded the incident on cellphone video.

Stenberg told LGBTQ Nation police were called because “they were there disrupting the service,” and the protesters were ejected because “they were promoting what they believe and how they feel,” which is that a trans woman is a woman. When asked if he understood that the group was expressing their support for transgender rights, Stenberg said, “I would say that’s right.”

Red Cloud said police treated them with respect and expressed that they were disappointed about how they were treated. “Officer Cooke was really, really supportive,” she said, and added that she has received a lot of support since posting the incident.

This story, first published in LGBTQ Nation, was followed up by KDLT-TV in Sioux Falls Monday evening. Both Red Cloud and transgender advocate Kendra Kay Heathscott spoke to the station about the incidents, as did Stenberg.