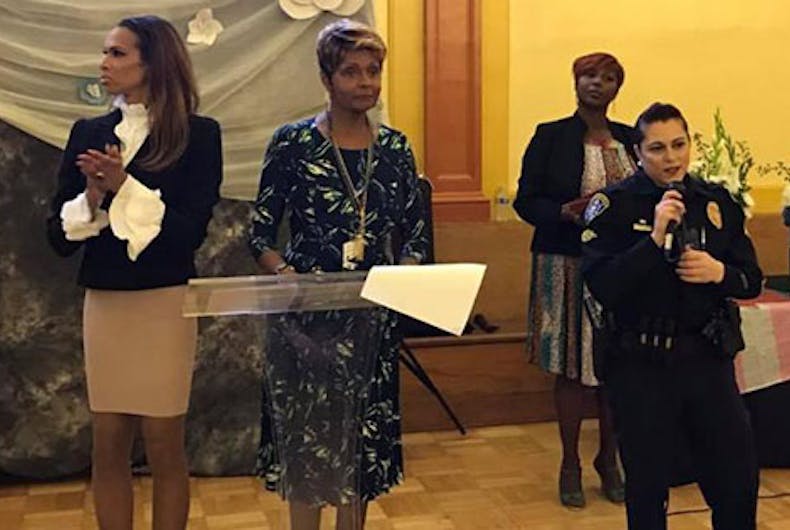 The first transgender officer in the San Diego Police Department was greeted by hundreds of supporters at the city’s LGBT center Friday and was also targeted by a group of trans radicals who shouted offensive slurs at her, including, “We don’t want a pig in here.”

Transgender activist Autumn Sandeen was in attendance and posted on Facebook, “the horizontal community violence was heartbreaking.”

Garcia, however, was unfazed by those in the crowd who heckled her, and instead asked the audience of some 400 people — there to celebrate the city’s Transgender Day of Empowerment — to respect the rights of those protesting, to free speech, “as long as it’s peaceful.”

As San Diego Gay Lesbian News reported, the event was focused on LGBT youth and was held to honor those receiving Tracie Jada O’Brien scholarships, and those in the trans community who have made a difference, like Garcia.

“This attack on police officer Garcia was one of the most ugliest incidents against our own that I have ever witnessed in our community,” Hillcrest Mayor Nicole Murray Ramirez told SDGLN. “What’s even sadder these anti-police activists, and these actions are supported by The Center associates “A.T” and CZ Firestone.”

Firestone is also known as Syra Olivia-Zoe Evans) and reportedly teaches at the Hillcrest Youth Center. She was one of the speakers at the event and posted an anti-police rant on Facebook following the protest: