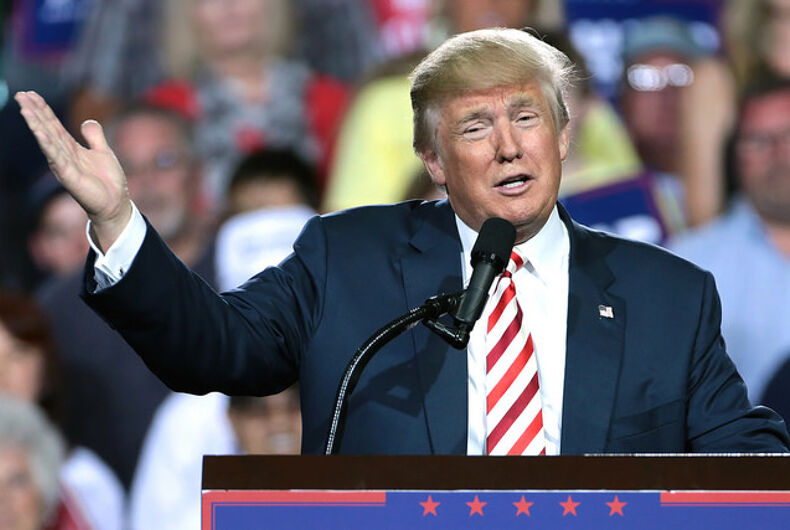 The New York Times is on a tear this morning about the Trump administration’s mealy-mouthed tepid support for LGBT rights despite his pinky swear that he’d be the best evah on our issues.

You simply have to read the entire piece.

It was a jarringly unorthodox moment even for Donald Trump. At a rally in Colorado last October, an audience member handed him a gay pride flag that bore a handwritten endorsement: “LGBTs for TRUMP.” The candidate smiled as he unfurled the flag, displaying it for a few seconds. A spokesman later said Mr. Trump was “proud to carry the ‘L.G.B.T. for Trump’ rainbow flag on stage,” since he was campaigning to be “president for all Americans.”

It didn’t take long for prominent gay Republicans to proclaim that the Republican Party had, at long last, turned a corner on gay rights under Mr. Trump… Yet, the nomination of several key officials, who have disparaged the L.G.B.T. community and sought to curtail the rights of its members, has exposed the narrative that Mr. Trump would be a champion of gay and transgender people as a fallacy.
…
For the foreseeable future, the federal courts are likely to be the only avenue for progress. It’s not too late, of course, for Mr. Trump to act like the transformational Republican on gay rights that some of his supporters hoped he would be. He could, for instance, urge Congress to pass a federal anti-discrimination bill. Yet his record of empty talk makes that seem as unlikely as the sight of a Republican presidential candidate waving a gay pride flag.

Beyond Stonewall: Why modern LGBTQ Americans should be thinking globally