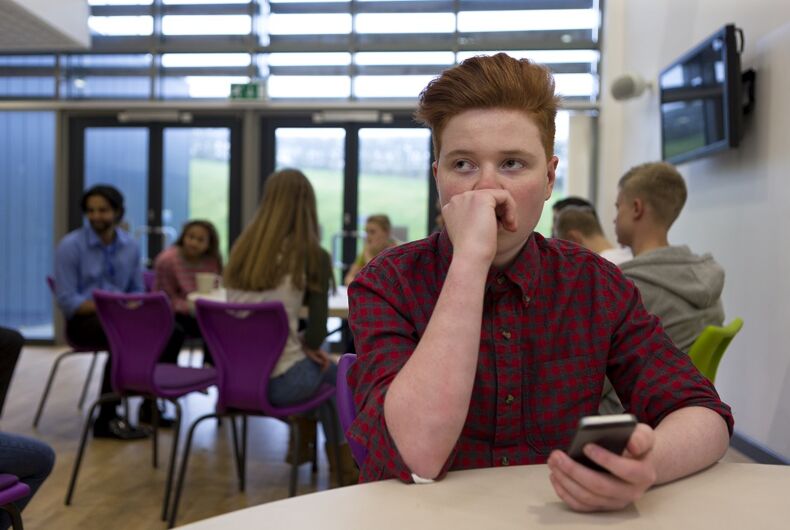 Ryan Patrick Halligan was born in Poughkeepsie, New York, in 1990. His parents described him as a shy, sensitive, and affectionate young child with an infectious smile that early on drew people close. Before he entered school, his parents had concerns about his speech, language, and motor skills development, and from preschool through fourth grade, they enrolled Ryan in special education services.

The family moved to Essex Junction, Vermont, where, by the fifth grade, he encountered bullying on a regular basis in his school. Rumors soon circulated throughout the school that Ryan was gay. By middle school, his classmates continually teased and harassed him for his learning disability and because they thought he was gay. They soon extended their taunts against Ryan into cyberspace.

Ryan displayed many of the symptoms of youth targeted by cyber-bullying: he spent long hours on his computer, and he was secretive regarding his online interactions. His parents saw him manifest several changes in his behavior: he increasingly lacked interest in engaging in social activities that included his peers, and he exhibited a pronounced change in his overall attitude, his appearance, and his habits.

On October 7, 2003, feeling that he could no longer live with the constant and escalating abuse, Ryan Patrick Halligan took his life. He was 13-years-old.

The American Psychological Association passed a resolution calling on educational, governmental, business, and funding agencies to address issues of face-to-face and cyber-bullying. In the resolution, they particularly addressed acts of harassment “about race, ethnicity, religion, disability, sexual orientation, and gender identity.”

The resolution specifically emphasized the high rate of bullying around issues of sexual orientation and disability:

While schoolyard bullying and harassment have long been problems for young people in our nation’s schools, computers have now allowed this abuse to extend to virtually all aspects of a person’s life.

In the first detailed study of its kind to address incidents of cyber-bullying on LGBT youth, Blumenfeld and Cooper found that 52 percent of LGBT youth between the ages 11 and 22 reported having been the targets of cyber-bullying several times; 54 percent had been bullied for their sexual identity and 37 percent had been bullied for their gender identity or expression in the past 30 days alone. Cyber-bullying attacks included electronic distribution of humiliating photos, dissemination of false or private information, or targeting people in cruel online polls, among many other means of attack.

The Gay, Lesbian, and Straight Education Network (GLSEN) found in its 2015 National School Climate Survey that 55.5 percent of LGBT students across the country felt unsafe at school based on their sexual orientation, and 37.8 percent felt unsafe because of their gender expression. About one-third of LGBT students missed at least one full day of classes in the past month over safety concerns.

GLSEN released in 2013 its first “Out Online: The Experiences of Lesbian, Gay, Bisexual and Transgender Youth” the finding that LGBT youth are almost three times (42 percent vs. 15 percent) more likely to be bullied or harassed online than heterosexual students and twice as likely to have been cyber-bullied via text messaging (27 percent vs. 13 percent). And 32 percent of LGBT respondents were sexually harassed online during the past year. This was four times as many as their non-LGBT peers. And 25 percent of LGBT students were sexually harassed via text message during the past year.

In the most recent National Civility Survey, a record high of 69% percent of U.S. residents across the spectrum of age believe that their country has “a major civility problem:” 75 percent perceive that incivility has reached “crisis levels” in modern life in terms of personal relationships, government, business, media, and online. And 56 percent believe that it will get even worse in the next 10 years.

We must not view bullying and harassment as simply youth problems. Instead, we must investigate the contexts in which bullying trickles down from society and is reproduced within the schools. Young people, through the process of social learning, often acquire bullying and harassing attitudes and behaviors, and they also often learn the socially sanctioned targets for their aggression.

If we are ever to interrupt the vicious cycle of bullying and cyberbully in our schools and in our society at large, one necessary step in the process is to make abusive behavior by adults unacceptable.