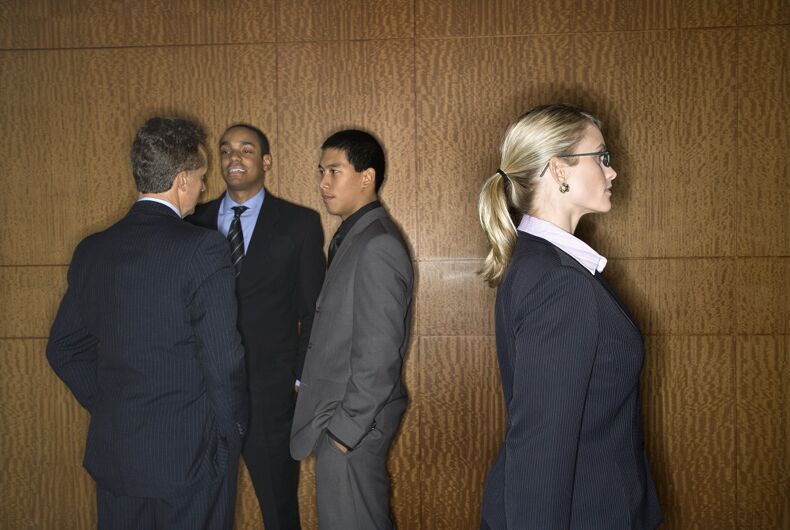 Straight men who like homophobic and sexist jokes might be covering for their own insecurities, a new study suggests.

Reading the study, I thought about all the times I’ve heard that some hateful message is “just a joke,” that not laughing at a racist or sexist joke meant that I was “humorless,” and that the best response to such jokes is just to “lighten up.”

But since I’m actually a pretty funny person, I know that what makes a joke funny depends a lot on context and on how it makes the people hearing it feel. There really is no such thing as universal, objective humor.

In this study published in Sex Roles by Emma O’Connor, et al., 166 heterosexual men were asked about their beliefs about their masculinity to determine to what degree they had “Precarious Masculinity Beliefs” (PMB). A higher PMB means that a man feels less secure about his masculinity.

After that, the men participated in a role-play situation where they were new employees for a comedy website and they had to rate jokes so that the good ones would appear in subscribers’ feeds. Before they could begin rating jokes, though, the men were asked to take a fake personality quiz so that their ratings would apply to the correct subscribers, and half the men were told that their personality was “feminine” while the other half received no gendered message. The label of having a “feminine” personality was meant to be a threat to men’s masculinity before they began rating jokes so that they would have something to compensate for.

Even though anti-Muslim jokes are also disparaging, the study found no correlation between liking that kind of humor and having one’s masculinity threatened. Same for the neutral jokes.

The study was repeated with another group of 221 men and similar results were found. These men were also asked if their taste in humor said something about their personality, and the men with high PMB and whose masculinity was threatened were more likely to say it did.

While this study isn’t saying anything that many of us didn’t already know – men who make sexist and homophobic jokes are just insecure – it’s good to have some numbers to back it up.

It can be hard to talk about hateful jokes. In one way, it’s very obvious that the only purpose for such jokes is to reinforce a stereotype, to make a group of people feel good that they aren’t this other group of people.

On the other hand, the use of humor to spread hatred makes it socially acceptable and provides an easy way to turn the tables on anyone who complains. Call out a sexist joke and suddenly you’re just too serious and you’re policing people’s words, and the conversation is about you instead of the person who was going around making sexist jokes in the first place.

So the next time someone makes a hateful joke around you and you don’t find it funny, that doesn’t mean that there’s something wrong with you or that you’re being dishonest.

If anything, it means something is wrong with them.

First 100 days: An exhaustive list of all of Trump’s pro-LGBTQ ‘wins’