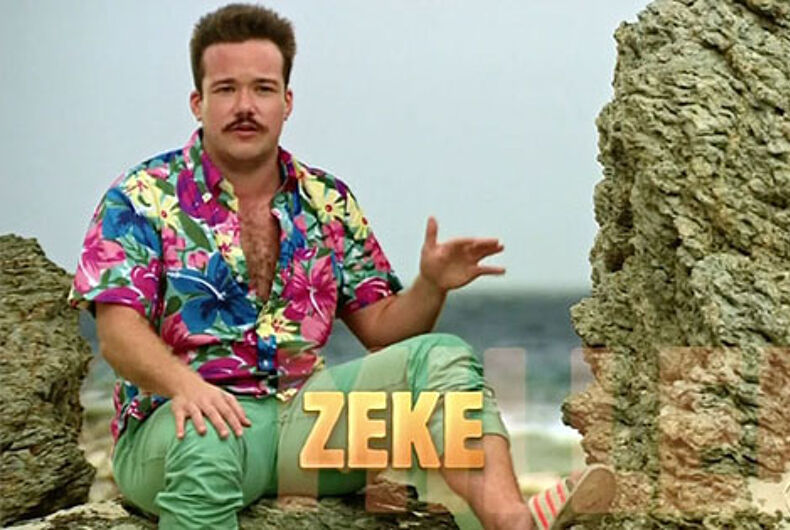 Zeke Smith of Brooklyn made history Wednesday as the first transgender contestant on the granddaddy of reality television competition shows, CBS’s Survivor — but not by choice.

Smith was outed on the show by tribemate Jeff Varner of North Carolina, of all places. Varner is a former television news anchor turned real estate broker who, like all the competitors on this season of “Game Changers,” was trying for a second chance at the million dollar prize.

And in a moment that caught everyone at tribal council by surprise — including Smith — Varner asked him, “Why haven’t you told anyone you’re transgender?”

Smith sat in stunned silence as the other contestants put their hands over their mouths and shook their heads in disgust. Even Varner said nothing, for eleven whole seconds, before explaining his question: “What I’m showing is a deception.”

That’s when their fellow tribemates finally erupted at Varner, simultaneously:

As Mercedes Allen wrote in Bilerico in 2013, transgender people are often accused of “deception” by not disclosing their status as trans.

The reality is that disclosure is often far more negatively consequential to a trans person than a cis partner: trans people are often subject to hate and even brutality for being open about being trans or having a trans history.

GLAAD’s Nick Adams weighed in on the decision by Varner, a calculated move intended to discredit his competitor, which backfired in the most phenomenal way:

Zeke Smith, and transgender people like him, are not deceiving anyone by being their authentic selves, and it is dangerous and unacceptable to out a transgender person. It is heartening, however, to see the strong support for Zeke from the other people in his tribe. Moments like this prove that when people from all walks of life get to know a transgender person, they accept us for who we are.

Varner at first defended his question, claiming he thought Smith was “out and loud and proud,” then boasting he himself was an advocate for trans people: “I argue for the rights of transgender people every day in the state of North Carolina.” He denied his intention was to out Smith, and he told host Jeff Probst: “Jeff, I’m arguing for my life. I feel like I have to throw everything at the wall.”

Smith, who had told the other competitors he was a gay man and inspired a fellow competitor to come out to him as gay in an episode during the prior season, finally spoke up: “In two seasons I’ve played Survivor, I told nobody.” Tai Trang, who is gay, shouted at Varner: “Nobody has the right to out anybody!”

Varner appeared to either finally understand what he had done — or was hoping by being apologetic he could save his own ass — told Smith he was “so sorry” to Smith, and told him he supports him. To which Probst commented, “Jeff, you can’t unring the bell.”

He asked Varner how he thought the LGBTQ community will react to his choice.

“The community around me knows who I am. They know what I support. My transgender friends know who I am and what I support. And they know I’m not this horrible monster.”

There were tears as each of the tribemates spoke in support of Smith and their disgust at what Varner had done.

“It’s kind of crappy the way it happened,” he said — and Varner manterrupted him with another of his dozens of “I’m sorry, Zeke” — but Smith forgave him and told Probst even though he didn’t see him he hoped maybe his outing will help someone.

“Maybe there’s someone who’s a Survivor fan, and me being out on the show helps him, or helps her, or helps someone else. So maybe this will lead to a greater good.

On Twitter, Smith tweeted advice for anyone who didn’t get the message: “Don’t out people.”

To learn how to be a better ally to trans people, click the link below. *Spoiler alert* Don't out people. https://t.co/5uBmPMwNgx

And he also had two messages for his fans, one serious:

We cannot control the hazards we face, we can only control how we respond. Love each other. #Survivor #Zekevivor

And one to make folks laugh:

Fun fact: My fly was down the entire time. #Survivor

At the conclusion of the episode, Probst did something unexpected, polling the tribal council instead of holding a secret ballot, and they voted Varner off the island.

Varner got to have the last word, telling the audience, tearfully, in the closing credits: “Nobody on the planet should do what I did tonight. Ever. And I’m so sorry to anyone I offended, especially to Zeke and his family.” And he tweeted: