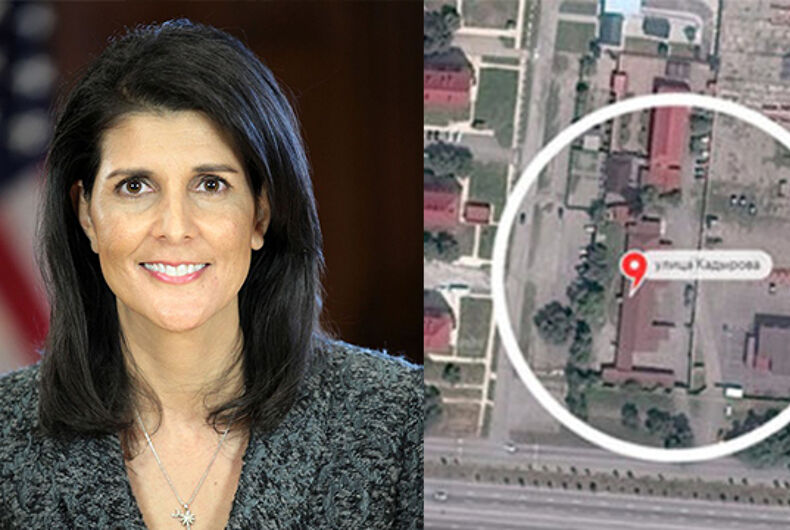 Disturbing reports are emerging out of Chechnya, alleging secret concentration camps being used to torture and kill gay men. At least 100 men are believed to be held in a former military headquarters in the town of Argun, where witnesses say they are subjected to interrogations and beatings.

Three men are missing and believed to be dead.

The men have allegedly been detained by law enforcement that began conducting sweeps for gay men after an LGBTQ activist applied for a Pride permit, Russian newspaper Novaya Gazeta reported, and a New York Times source confirmed.

“Gay people have been detained and rounded up and we are working to evacuate people from the camps and some have now left the region,” said LGBTQ activist Svetlana Zakharova.

“Those who have escaped said they are detained in the same room and people are kept altogether, around 30 or 40. They are tortured with electric currents and heavily beaten, sometimes to death,” Zakharova added.

The Russian LGBT Network has also confirmed the accounts.

A spokesman for Chechnya’s leader, Ramzan Kadyrov, denied the existence of gay people in the region, saying, “If such people existed in Chechnya, law enforcement would not have to worry about them, as their own relatives would have sent them to where they could never return.”

Now, GLAAD President Sarah Kate Ellis is calling on U.N. Ambassador Nikki Haley to condemn the arrest and torture of Chechen men and the reported prison to which they are being taken against their will.

“It is beyond horrific for a country to proactively target, arrest, and abuse LGBTQ people,” said Ellis in a statement. “U.S. Ambassador Nikki Haley must condemn this humanitarian crisis. As the leader of the free world, we can’t watch in silence as the world slips back to an era we should never go back to.”

I'm calling on @nikkihaley to speak up against the reported #LGBTQ concentration camps in Chechnya. RT to join me. https://t.co/NM05ag67fA

Acting Spokesperson for the State Department Mark Toner condemned the attack on the LGBTQ community in Chechnya in a statement on April 7.

“We are increasingly concerned about the situation in the republic of Chechnya, where there have been numerous credible reports indicating the detention of at least 100 men on the basis of their sexual orientation,” he said. “Some reports indicate many of those arrested have been tortured, in some cases leading to death. We categorically condemn the persecution of individuals based on their sexual orientation or any other basis.”

“We are deeply disturbed by recent public statements by Chechen authorities that condone and incite violence against LGBTI persons,” Toner continued. “We urge Russian federal authorities to speak out against such practices, take steps to ensure the release of anyone wrongfully detained, conduct an independent and credible investigation into these reports and hold any perpetrators responsible.”

A State Department spokesperson on Monday referred the Washington Blade to Toner’s statement in response to a request for comment on the prisons.

A spokesperson for the U.S. Mission to the U.N. referred the Washington Blade to the statement that Toner released on April 7 also, saying they “obviously support it” in an email.

Toner had said that Tillerson was “certainly willing to meet with President Putin to discuss all of these issues.”

‘It’s going to be epic:’ LeAnn Rimes is the headline act at NYC’s PrideFest