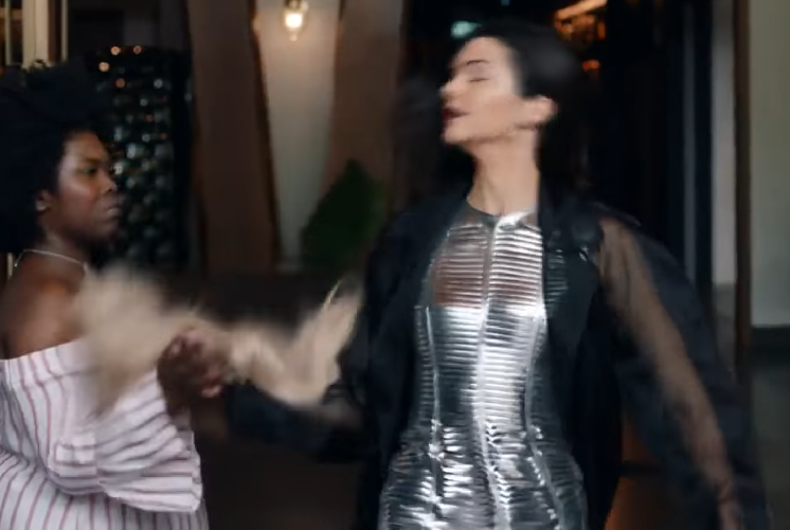 Pepsi ads aim to emphasize its youthful brand by championing it as “the choice of a new generation.” Not a bad marketing tool to turn its second-class status to Coca-Cola, its arch-rival, into an advantage.

However, Pepsi’s recent commercial starring Kendall Jenner (of the Kardashian clan) was a fiasco.

The backlash was fast and furious because the ad preyed on racial and ethnic stereotypes: an Asian person as a classical musician; a Muslim woman wearing a hijab; black males as reggae and hip-hop artists; white riot gear police holding fort against a multi-ethnic crowd.

And, of course, there was the reenactment of the white rescuer trope; Jenner thwarts a possible riot simply offering a cop a Pepsi. However, before the denouement Jenner removes her blonde wig and gives it to a black woman because natural hair – as any Eurocentric fashion-conscious female knows- won’t do.

Front and center of the commercial’s narrative arch is the misappropriation of the iconic and viral photo of Ieshia Evans. Evans is the 28-year-old African American mother who during a Black Lives Matter protest in Baton Rouge stunned the nation as well as the world when she silently walked to the front line of heavily-armed police and offered her hands to be arrested.

The ad was not only tone deaf in culturally appropriating the Black Lives Matter struggle, but it was also an ill-conceived project to tap into a multicultural market: Millennials.

Of all generations, millennials are the most health-conscious customers, and non-alcoholic carbonated drinks… well, they are just not that into them. Connexity, a consumer analytics provider, revealed in December that Millennials between the ages of 18-24 consume mostly natural drinks.

However, both cola conglomerates gear their ad commercials mainly to the children of their most loyal fan base: African Americans and Latino Americans.

Pepsi and Coke have a long history with the African American community. Pepsi, however, has nearly a century-old loyal fan base because Coke, once referred to as the “Jim Crow drink,” would not sell to African American markets. Pepsi, derisively referred to as the “N-word drink,” exploited the opportunity, narrowing its competition with Coke by opening markets in the Southern Black Belt and the Northern inner cities and hiring an all-black sales team. Pepsi ads flooded stores patronized by us and in African American publications with black models and celebrities. And Pepsi is still doing that. As recently as 2013, Beyoncé and Christina Aguilera were hired to promote domestic sales in black and Latino markets, respectively.

Despite public outcry, many multicultural marketers at soft-drink industries applauded Pepsi for their recent ad for recognizing the expanding face of its consumer base and for aiming to employ “guerrilla advertising” and “rebel marketing” at disaffected Millennials, especially in urban cities.

With push-back from healthcare professionals, activists, and environmentalists about marketing these drinks to economically distressed areas, the plea has fallen on deaf ears.

“But let’s face it. Hispanics and African Americans are much less interested in diet products. Sugary drinks — often the sweeter the better — do well with them,” Todd Putman, a white professional multicultural marketer, quoted in the Advertising Age article “Soft-Drink Industry Is Smart to Target Hispanics and Blacks.” “There are a lot of cultural barriers to getting both these groups to understand the importance of being lean.”

The inundation of these ads are one of those cultural and socioeconomic barriers. For example, Coke and Pepsi are the beverages of choice among black and latino youth, exceeding water, despite both former mayor Michael Bloomberg’s and former First Lady Michelle Obama’s campaigns against unhealthy sugary drinks. Coke and Pepsi ads run disproportionately higher on Telemundo and the Black Entertainment Network than on other networks.

With African Americans and Latinos markets viewed as providing soft drink companies a “lifetime of opportunity,” these companies have no incentive to create healthier beverages. And they don’t see it as exploitation, but rather as niche marketing.

“Do they owe these groups an apology? I don’t think so. On many levels, the soft-drink industry is being demonized as if it were the new big tobacco.”

Pepsi is lauded as a friend to African American and Latinos communities. As a corporate philanthropist, Pepsi gives generously to African American and Latinos causes and organizations. In 2015, Pepsi celebrated the 50th anniversary with its Giving Back program. One of its big grant recipients was Big Brothers/Big Sister of Metropolitan Chicago, an at-risk youth program.

But how are the youth helped by drinking their product?

Pepsi has a high concentration of sugar and caffeine. Both are addictive ingredients keeping our children coming back for more.

Their ads are too.