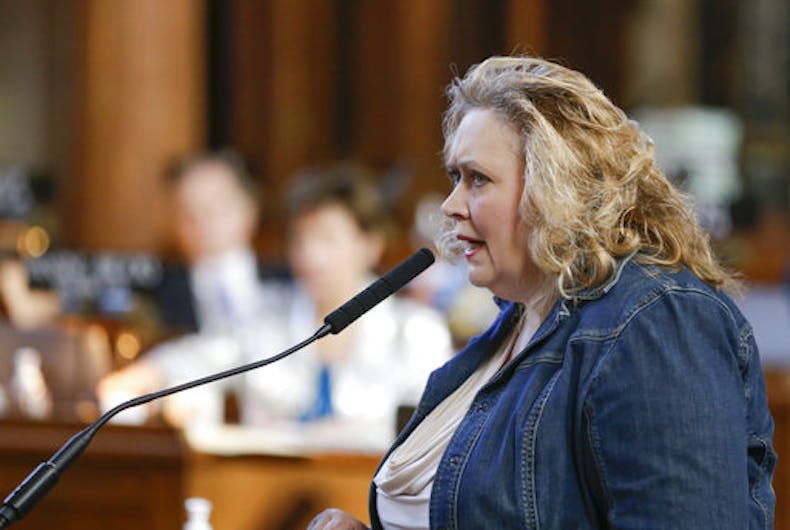 Neb. Sen. Carol Blood of Bellevue speaks in Lincoln, Neb., Thursday, April 6, 2017, during debate on a measure that would protect Nebraska workers from discrimination based on their sexual orientation or gender identity. Senators who support the bill argue it's a civil rights issue and an economic one. They say Nebraska needs to attract and retain young workers, who generally support diversity, while opponents say the measure threatens the religious freedom of business owners who will be forced to hire LGBT people. Photo: AP Photo/Nati Harnik

Nebraska lawmakers who have sought for four years to ban discrimination against LGBT workers are emboldened by a new federal court decision linking such protections to the 1964 Civil Rights Act, the sponsor said Thursday.

While the statewide nondiscrimination measure still faces long odds in the conservative-dominated Legislature, the ruling Tuesday by the 7th Circuit in Chicago gave supporters some extra ammunition to make their case.

The court, contradicting several previous appellate decisions, found that the federal law’s prohibition against discrimination based on “sex” also applies to sexual orientation. The U.S. Supreme Court may ultimately have to sort out whether LGBT workers enjoy the same protections from discrimination that the Civil Rights Act more explicitly grants based on race, religion or national origin.

“The 7th Circuit’s ruling only legitimizes the fact that people should not be fired because they are LGBT,” said Sen. Adam Morfeld, a Lincoln Democrat who sponsored the bill. “The court provided legitimacy and momentum for our argument.”

Debate began Thursday on the Nebraska bill, but senators adjourned for the week without a vote.

Supporters will need 33 votes to break a filibuster, and only 21 of the 49 senators have spoken in favor of the measure so far.

That includes nearly all of the body’s Democrats and several moderate Republicans, including Sen. Bob Krist of Omaha, who introduced a motion to kill a similar bill last year. Krist said he has been persuaded to change his mind in part because of the success of an LGBT protection ordinance Omaha enacted in 2012.

Fellow Omaha-area senators argued that the ordinance helps the area demonstrate it is a welcoming place for businesses like Facebook, which announced Tuesday that it would build a data hub near Omaha employing 100 to 150 people. They said a discrimination ban would help shield Nebraska from the kind of revenue losses other states, such as Indiana and North Carolina, endured when they enacted laws perceived as targeting the LGBT community.

One opponent, Republican Sen. John Lowe, a former restaurateur from Kearney, said passing such a bill would leave business owners questioning every day whether they unintentionally violated the law.

“We’re running small businesses out of Nebraska with laws like this,” he said.

At least 22 states and the District of Columbia outlaw workplace discrimination based on sexual orientation, gender identity or both. In Nebraska and some other states that don’t, cities have adopted their own ordinances.

At the federal level, President Donald Trump has rolled back an Obama administration edict requiring companies that contract with the U.S. government to prove they don’t discriminate based on sexual orientation or gender identity.

“Tolerance is a two-way street,” said Geist, a Lincoln Republican. “I support only those laws that don’t pick and choose who gets freedom and who doesn’t.”

Sen. Mike McDonnell, an Omaha Democrat who supports the discrimination ban, said his grandfather had to pretend he wasn’t Irish or Catholic to find a job. He said he doesn’t want his nephew to have to pretend he isn’t gay.

Someone in a small Wisconsin town is stealing & burning pride flags