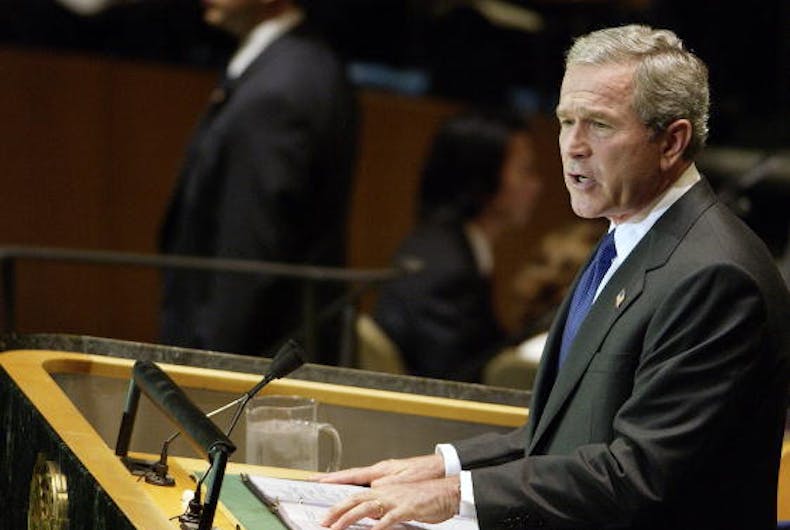 PEPFAR is a program initiated in the Bush administration that provides funding for treatment, care, and prevention of HIV/AIDS in poorer countries, mostly in Africa and the Caribbean. It is a successful program that has provided life-saving medication to millions of people, helped over a million HIV-negative babies be born to HIV-positive mothers, and generally improved the economic and social climates of recipient nations.

The Trump Administration called for $300 million in cuts to PEPFAR’s estimated $1.1 billion yearly budget, the bulk of which would be directed to the military, Homeland Security, and Veterans Affairs.

Bush argues that the program has been successful:

Nearly 15 years later, the program has achieved remarkable results in the fight against disease. Today, because of the commitment of many foreign governments, investments by partners, the resilience of the African people and the generosity of the American people, nearly 12 million lives have been saved. And nearly 2 million babies have been born HIV-free to infected mothers.

And that the program is in US interests:

It is clear that the generosity of the American people has had a huge impact — one that reflects the view that all lives are precious, and to whom much is given, much is required. This lifesaving work also has a practical purpose for Americans. Societies mired in disease breed hopelessness and despair, leaving people ripe for recruitment by extremists. When we confront suffering — when we save lives — we breathe hope into devastated populations, strengthen and stabilize society, and make our country and the world safer.

Bush writes that we are “on verge of an AIDS-free generation,” and cutting funding to PEPFAR at this moment could have large consequences.

This is similar to former State Department worker Jack Chow’s argument that cutting PEPFAR funding even temporarily could have a long-term impact on people’s ability to access medication because cuts would disturb the “supply chains, financing mechanisms, and myriads of organizations” needed to keep treatment available.