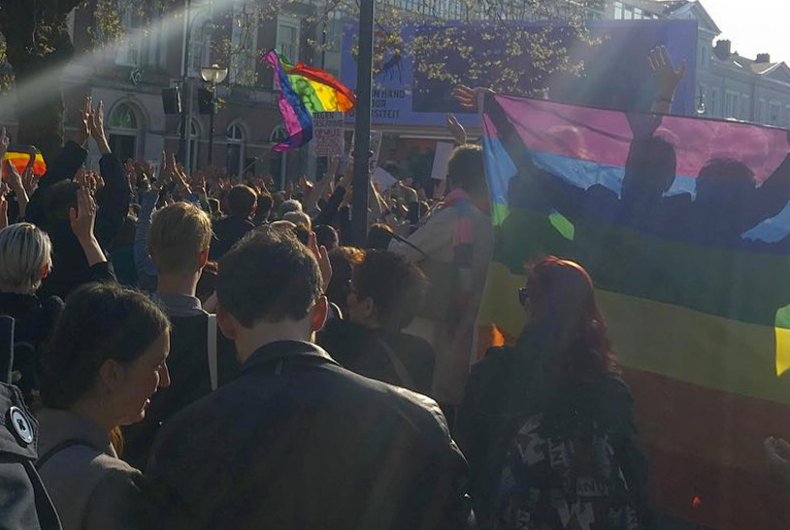 Thousands of Dutch took to the streets Saturday across The Netherlands in a show of support for a gay couple that was assaulted while holding hands.

An estimated 2,500 people carried rainbow flags as the demonstrated in Arnhem, where two men in their thirties were brutally beaten.

After a #GayCouple was attacked for holding hands in the #Dutch city #Arnhem, hundreds walked #HandInHand in #Amsterdam to show #solidarity & #support #✊️

Jasper Vernes-Sewratan, 35, and his husband Ronnie Sewratan-Vernes, 31, were attacked while walking home from a date and holding hands. During the assault, they say, their attacker shouted anti-gay slurs. Both men sustained injuries, and Ronnie had several teeth knocked out with a bolt cutter, according to the couple’s account.

“You have pulled us through this terrible week,” Jasper told those gathered in support, MSN reports.

Demonstrations also gathered Saturday in The Hague and Eindhoven.

Other shows of support have included men posting pictures of themselves holding hands with other men alongside the hashtag #allemannenhandinhand (or “all men hand-in-hand”), which went viral after Dutch politician Alexander Pechthold was photographed holding hands with a male colleague.

Five teenagers are under investigation for their role in the attack. An attorney for one of the youth says the gay couple started the fight, and that one of the alleged assailants is planning to file a complaint against the couple.The Netherlands was the first country in the world to enact marriage equality in 2001.