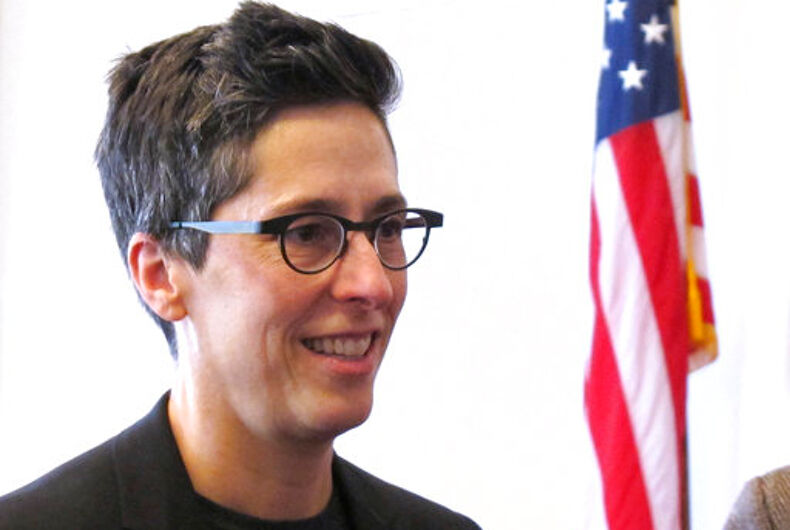 Alison Bechdel visits the Statehouse in Montpelier, Vt., where she was appointed Cartoonist Laureate of Vermont, Thursday April 6, 2017. Bechdel also was awarded a MacArthur Genius Grant in 2014, which honors people who show "exceptional creativity" in their work and the likelihood of more. Photo: AP Photo/Wilson Ring

Vermont’s new cartoonist laureate has made a career out of illustrating the complexities of same-sex relationships and says the world has changed around her and is now much more accepting of her work.

Alison Bechdel’s memoir and graphic novel about growing up with a bisexual father was adapted into a Tony Award-winning musical. Bechdel was given the cartoonist laureate title Thursday at the Statehouse in Montpelier.

After meeting Republican Gov. Phil Scott she said that when she began cartooning about same-sex relationships decades ago it was “the most subcultural, fringe, beyond-the-pale thing you could ever think of doing.”

In 2014, she was awarded a MacArthur Genius Grant, which honors people who show exceptional creativity.

She says as cartoonist laureate she’ll call attention to cartooning as an art form.

© 2017, Associated Press, All Rights Reserved.
This material may not be published, broadcast, rewritten, or redistributed.
Alison Bechdel, Cartoonist Laureate, Dykes to Watch Out For, Fun Home, Gov. Phil Scott, Vermont