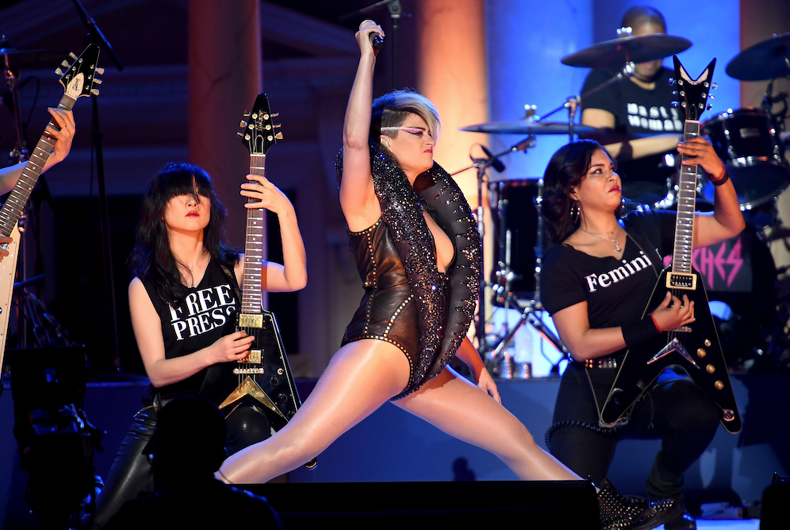 Last night, late night comedian Samantha Bee hosted her own version of the annual White House Correspondents’ Dinner. The event was billed as a celebration of free press and served as a fundraiser for the Committee to Protect Journalists, reportedly raising $200,000 for the organization.

Bee’s aptly titled “Not the White House Correspondents’ Dinner” featured comedians, pre-recorded sketches, and more than a handful of queer moments. Check out a few of the highlights below.

Queer and notoriously raunchy musician Peaches open the evening with a performance of “Boys Wanna Be Her,” which happens to also be Samantha Bee’s theme song, before the comedian took the stage. In addition the gender-bending chorus, the single from her 2006 album Impeach My Bush song also references Stonewall and Cyndi Lauper’s “She Bop.”

Fellow Canadians and queer-twin pop-rock duo Tegan and Sara made an appearance on the red carpet.

“Our role is to drink and celebrate with all the amazing journalists, who are doing great work in this terrifying time,” Tegan Quin told the Washington Post.

During a segment in which comedians roasted Trump in quick succession, lesbian comedian Cameron Esposito dons “Trump drag” to poke fun at the president tape-up tie, with a little help from her partner in comedy and life, Rhea Butcher.

In a Man in the High Castle-inspired dystopian in which Ted Cruz is president/overlord, George Takei offers Samantha Bee a video that holds a vision of another world — one where Hillary Clinton won the presidency instead of Trump.

5. The Roast of Reagan

In a pre-recorded bit, Bee roasted past presidents in period-appropriate attire and personas. When it got to Ronald Reagan, Bee delivered a burn on his dangerous disregard for people with HIV/AIDS.

Ruling against lesbian Methodist bishop highlights divisions in the denomination