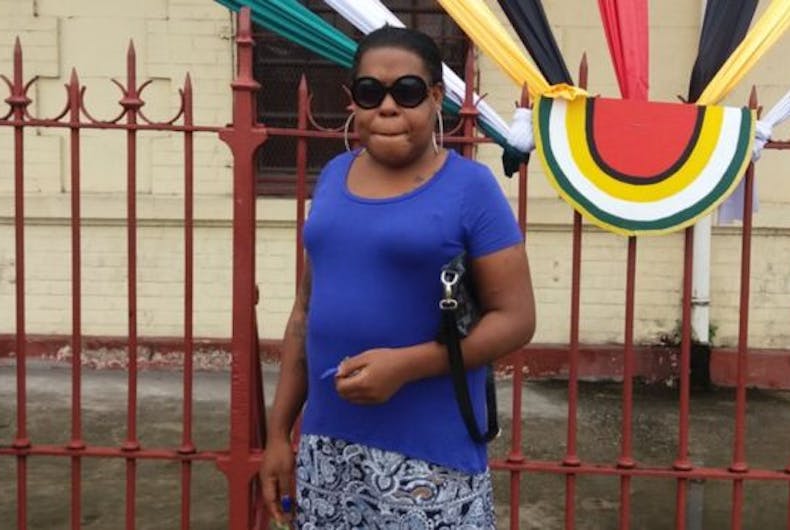 A transgender woman in Guyana said that she was stabbed in the street, and that when she tried to get justice, she was not allowed to enter the court room because she refused to dress in men’s clothing.

Petronella Trotman said that she was walking down the street last January in Georgetown when she was approached by a young man. He tried to start an argument with her, and then he became violent.

“And he joock [stabbed] me to my neck with scissors. I fell to the ground and when he left, I ran away. Then he came back with some glass bottles and pelted me down.”

Trotman went to the Georgetown Magistrates Court to report the attack. At her first appearance at the court, she was told to “dress like a man” in future court appearances.

She refused and showed up to court in March in a long skirt and a blue top. Magistrate Dylon Bess refused to let her in citing “inappropriate dress” and tried the case without her. Trotman only learned that the charges were dismissed when the attacker left the building.

She said she will not be appealing the decision due to lack of funds. “I finished with the case. It’s sad but what you can do? Certain laws need to be changed.”

Bess told BBC News that his decision was appropriate. “Sometimes persons commit offenses dressed as males and then when they appear in court dressed as a female it can have implications for how a victim can identify his or her accuser, or vice versa.”

His order was based on a 19th century law from when Guyana was still a British colony. The law bans cross-dressing for “any improper purpose” and leaves interpretation of that ban to the magistrates. Bess argues that Parliament has to change the law.

Former Guyana Bar Association president Ronald Burch-Smith said, “There’s a legitimate concern when it comes to things like crime and robbery, that persons dressed in disguise might take advantage of female clothing. But in the [cases] that have come up so far that has never been an issue. It’s taking advantage of an already oppressed minority.”