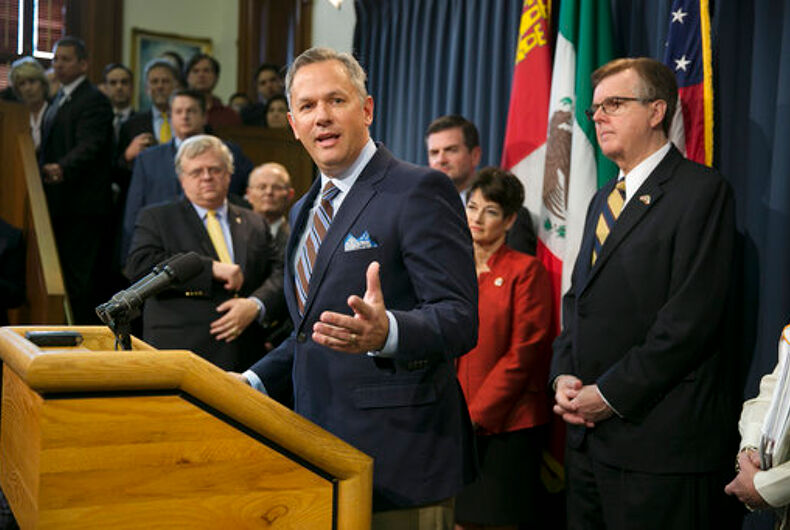 Despite Republican assurances that North Carolina’s “bathroom bill” isn’t hurting the economy, the law limiting LGBT protections will cost the state more than $3.76 billion in lost business over a dozen years, according to an Associated Press analysis.

Over the past year, North Carolina has suffered financial hits ranging from scuttled plans for a PayPal facility that would have added an estimated $2.66 billion to the state’s economy to a canceled Ringo Starr concert that deprived a town’s amphitheater of about $33,000 in revenue. The blows have landed in the state’s biggest cities as well as towns surrounding its flagship university, and from the mountains to the coast.

The AP analysis — compiled through interviews and public records requests — represents the largest reckoning yet of how much the law, passed one year ago, could cost the state. The law excludes gender identity and sexual orientation from statewide antidiscrimination protections, and requires transgender people to use restrooms corresponding to the sex on their birth certificates in many public buildings.

Still, AP’s tally is likely an underestimation of the law’s true costs. The count includes only data obtained from businesses and government officials regarding projects that canceled or relocated because of HB2. A business project was counted only if AP determined through public records or interviews that HB2 was why it pulled out.

The AP also tallied the losses of dozens of conventions, sporting events and concerts through figures from local officials. The AP didn’t attempt to quantify anecdotal reports that lacked hard numbers, or forecast the loss of future conventions.

Bank of America CEO Brian Moynihan — who leads the largest company based in North Carolina — said he’s spoken privately to business leaders who took projects elsewhere because of the controversy, and he fears more decisions like that are being made quietly.

“Companies are moving to other places, because they don’t face an issue that they face here,” he told a World Affairs Council of Charlotte luncheon last month.

Other measures show North Carolina has a healthy economy. By quarterly gross domestic product, the federal government said, North Carolina had the nation’s 10th fastest-growing economy six months after the law passed. The vast majority of large companies with existing North Carolina operations have made no public moves to financially penalize the state.

HB2 supporters say its costs are tiny compared with an economy estimated at more than $500 billion per year, roughly the size of Sweden’s. They say they’re willing to absorb those costs if the law prevents predators from posing as transgender people to commit assaults in restrooms — acts the law’s detractors say are entirely imagined.

Lt. Gov. Dan Forest, one of the strongest supporters, accused news organizations of creating a false picture of economic upheaval. He declined a request for an interview based on AP’s analysis.

“The effect is minimal to the state,” Forest told Texas legislators considering a similar law. “Our economy is doing well. Don’t be fooled by the media.”

But AP’s analysis shows the economy could be growing faster if not for projects that have canceled.

Those include PayPal canceling a 400-job project in Charlotte, CoStar backing out of negotiations to bring 700-plus jobs to the same area, and Deutsche Bank scuttling a plan for 250 jobs in the Raleigh area. Other companies that backed out include Adidas, which is building its first U.S. sports shoe factory employing 160 near Atlanta rather than a High Point site, and Voxpro, which opted to hire hundreds of customer support workers in Georgia, rather than North Carolina.

“We couldn’t set up operations in a state that was discriminating against LGBT” people, Dan Kiely, Voxpro founder and CEO, said in an interview.

All told, the state has missed out on more than 2,900 direct jobs that went elsewhere.

An analysis by the state Commerce Department shows that state officials expected the PayPal expansion to contribute more than $200 million annually to North Carolina’s economy. By the end of 2028, the state expected PayPal to have added $2.66 billion.

The same analysis of the Deutsche Bank project estimated a total impact of about $543 million by the end of 2027. The economic model has been used for more than a decade when the state offers major tax breaks.

State officials said they didn’t run the same analysis for CoStar, Voxpro and Adidas, so losses attributed to them were calculated using wages and other figures from the companies or state documents.

Meanwhile, canceled conventions, concerts and sporting events have deprived the state of more than $196 million, according to tourism officials around the state.

All told, the state will have missed out on more than $3.76 billion by the end of 2028. The losses are based on projects that already went elsewhere — so the money won’t be recouped even if the law is struck down in court or repealed.

Tourism officials in several cities say the numbers they report represent only a fraction of the damage the law has done. They typically track large conventions but don’t have firm numbers when smaller groups cancel — or rule out North Carolina before booking.

“The biggest impact is how many times our phones are not ringing now,” said Shelly Green, CEO of the Durham Convention & Visitors Bureau. She said several sporting events and conventions that canceled have deprived the city of about $11 million.

“When you think about it,” Green said, “this whole thing is just such a dumpster fire, and nobody wants to go near it.”

Transgender woman stabbed, kept out of court because of skirt