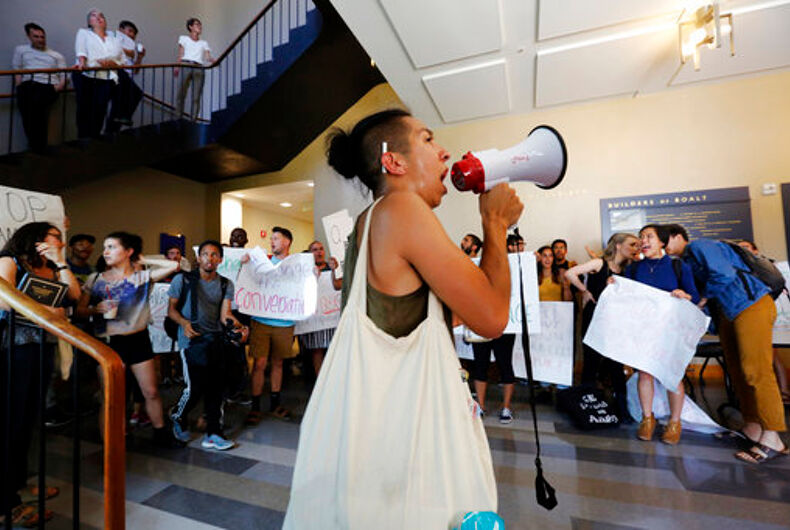 This Sept. 7, 2016 photo, Pablo Gomez, Jr. a 4th year student, leads a protest chant in the Boalt Hall at the Law School on the on the UC Berkeley campus in Berkeley, Calif. Authorities said Gomez stabbed to death a popular elementary school teacher. Soon, the crime that police described as "very brutal and unusual" was sucked up into the debate over gender identity when it was reported that Gomez preferred to be called "they" rather than "he." Photo: Laura A. Oda/East Bay Times via AP

Pablo Gomez Jr. was a University of California, Berkeley, senior majoring in Latino studies and a prominent campus activist when authorities say he stabbed a popular elementary-school teacher to death.

Soon, the crime that police described as “very brutal and unusual” in a city that reported just two homicides last year was sucked up into the debate over gender identity when it was reported that Gomez preferred to be called “they” rather than “he.”

Even in famously liberal Berkeley, with its long history of protest, the uproar came as a surprise, overwhelming the online news site, www.berkeleyside.com, that first reported on Gomez’s preference.

“I didn’t see it as something that would anger anyone,” reporter Emilie Raguso said.

On the university campus, where the debate over nontraditional pronouns has simmered, some students said Gomez’s case is different.

“I think you give away your right to make a demand like that when you are arrested for killing somebody,” said junior Jonothan Chow, a member of the College Republicans.

Representatives of UC Berkeley’s Gender Equity Resource Center, where Gomez was a member, declined requests to comment on the controversy, as did other gay rights activist groups in Berkeley.

Victim Emilie Inman, a 27-year-old native of France, was found in her home in January with a “We Stand with Standing Rock” sign in the front window she shared with other young roommates a few miles from campus.

Hours earlier on Jan. 6, police found Kiana Schmitt, 24, seriously injured outside an apartment just north of campus. Police have declined to say how Schmitt was connected to Gomez.

Gomez was arrested Jan. 7 at a Burbank hospital near the Southern California home of Gomez’s parents. Gomez is being held in jail and is accused of killing Inman and assaulting Schmitt.

A young woman who answered the door this week at Inman’s home declined to comment, and her family also has refused requests from The Associated Press and other media to comment on her death.

Gomez’s attorney, George Arroyo, declined to comment and Gomez’s parents did not respond to email requests for comment. Their telephone listing in Los Angeles appears disconnected.

The judge in the case ordered a mental health evaluation after Gomez was removed from a Feb. 1 court hearing to enter a plea to charges of murder, attempted murder, assault with a deadly weapon and robbery.

Deputies led a kicking and screaming Gomez from the courtroom after a brief meeting with Arroyo.

Transgender woman stabbed, kept out of court because of skirt