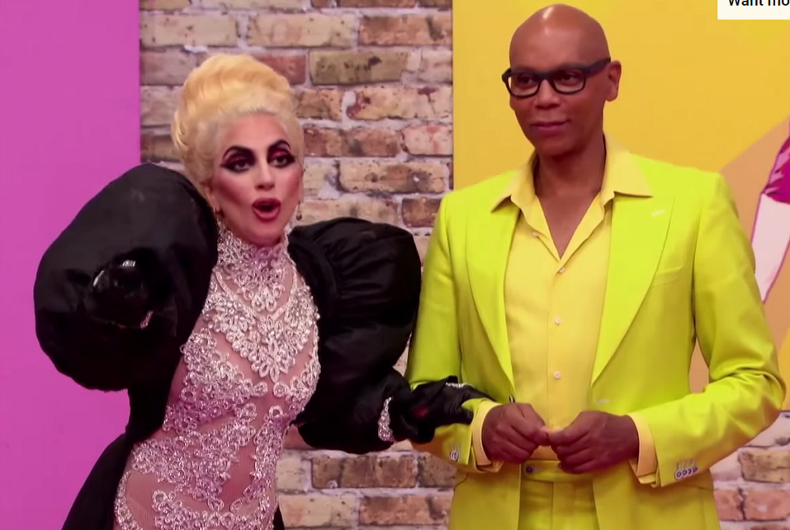 RuPaul’s Drag Race‘s ninth season debuted Friday on VH1, a big move for a show that started on Logo. And of course I was excited.

I’ve watched every season of RPDR, a few of them multiple times. It’s the only reality show I’ve watched in years and one of the few television programs I watch at all. I absolutely love this show.

Still, I have to admit that the season premier was kind of boring. Here’s why.

7. Lady Gaga’s entrance was the wrong kind of suspense.

I don’t know how long it took for Gaga to reveal that she was not a Gaga impersonator but actually Lady Gaga herself. In real life, probably 20 seconds. On the show, it felt like hours.

The question I was asking wasn’t “Is that really Lady Gaga?” since the audience already knew from the start. Instead, I was thinking, “When are they going to move on to the mini-challenge already?”

6. There was no mini-challenge.

Season premiers on RPDR start with an absurd mini-challenge, where the queens have to jump on a trampoline or into a tank of water for a photo. It’s a fun way to get to know them before the big challenge, but this episode just skipped right over it.

It didn’t look like anyone told the queens, though. Their entrance looks were generally basic, which previous seasons’ contestants have said is a strategic choice since their first outfit on-camera is also one they’re going to have to do something ridiculous in, so they try to keep it practical.

It was like having dinner without an appetizer. Of course, that’s how I normally have dinner, but not when it’s a special occasion.

It became obvious a few seasons ago that the contestants on RPDR knew the challenges before arriving in the work room, which is different from when the show started and the queens were scrambling to find something to put on for each challenge.

Letting them prepare means that the looks can be more complicated and finished. On the other hand, seeing the contestants work instead of just unpack helps the audience get to know them.

Since those parts of the show were combined, he stuck with boy drag the whole time.

Which is too bad, because a highlight of each show is seeing a new flawless look from RuPaul. Even the way Ru walked on stage was different because of the boy drag. It made the whole episode seem less special.

3. No one was eliminated.

The the direct critiques, the lip sync, and the tears are a part of the show. They’re a chance to see spontaneous reactions and to shine the spotlight on two queens, even if it’s for the wrong reason.

This episode was like having dinner with no dessert.

2. Lady Gaga was meh at the judges’ table.

The celebrity guest judges on RPDR usually don’t get as much airtime as the home-team judges for a reason: they’re less at ease with the crowd, less knowledgeable about drag technique and culture, and less funny.

In this episode, though, the producers kept a lot of Gaga’s commentary in the final cut. Maybe it’s because Gaga is a more famous celebrity than they normally get on RPDR.

It couldn’t have been because what she said was interesting, though. Take away the insipid name-dropping and the dozen permutations of “This is a queen to watch out for!” and the most interesting thing she had to say was that entertainment “is part of [drag].”

1. 39 outfits is just too many to present with no context.

My guess is that the audience was supposed to get a feel for each queen through the three looks, but we’re still learning their names. Presenting them this way made it hard to see each look in any sort of context. Also, not showing anything about how the contestants were inspired or how they created the looks meant that the final product was just a single moment without a story.

39 outfits is a lot of information to put in front of an audience, too much breadth without enough depth.

Taken with the “fun fact” commentary and the lack of mini-challenge or elimination, the episode was like a Wikipedia article I wasn’t able to scroll through fast enough. I hope this is not a sign of what RPDR will be like now that it’s on VH1.