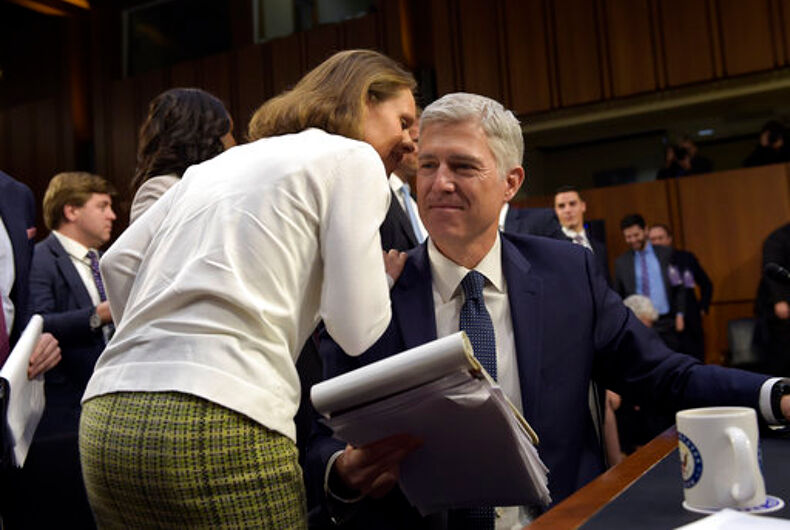 Marie Louise Gorsuch, wife of Supreme Court Justice nominee Neil Gorsuch, talks to her husband during a break in testimony on Capitol Hill in Washington, Wednesday, March 22, 2017, during his confirmation hearing before the Senate Judiciary Committee. (AP Photo/Susan Walsh)Photo: AP

The top Democrat in the Senate said Thursday he will oppose the nomination of Judge Neil Gorsuch to serve on the Supreme Court and encouraged other Democrats to reject President Donald Trump’s choice, setting up a showdown with majority Republicans.

“I have concluded that I cannot support Neil Gorsuch’s nomination,” New York Sen. Chuck Schumer said on the Senate floor. “My vote will be no and I urge my colleagues to do the same.”

Shortly before Schumer’s announcement, Pennsylvania Sen. Bob Casey, who faces re-election next year in a state Trump won, also announced his opposition. Casey said he had “serious concerns about Judge Gorsuch’s rigid and restrictive judicial philosophy, manifest in a number of opinions he has written on the 10th Circuit.”

The opposition from the two Democrats came after two days of hearings in which Gorsuch emerged unscathed and with solid Republican support in the GOP-led Senate.

The Judiciary panel is expected to vote in the next two weeks to recommend Gorsuch favorably to the full Senate. Though Gorsuch is expected to eventually be confirmed, the process on the Senate floor is less assured.

Some Democrats have already said they want to try to block the nomination. That means Senate Majority Leader Mitch McConnell, R-Ky., will have to round up 60 votes to proceed to a confirmation vote, including eight Democrats.

It’s unclear if he will have those votes. Democrats Jeff Merkley of Oregon, Kirsten Gillibrand of New York, Sherrod Brown of Ohio, Tammy Baldwin of Wisconsin, Elizabeth Warren of Massachusetts and Ed Markey of Massachusetts have declared their opposition.

No Democrat has yet pledged to support the judge, but Sen. Joe Manchin of West Virginia said Wednesday he is open to voting for him. McConnell could also change Senate rules to confirm Gorsuch with a simple majority in the 100-member body, and appears prepared to take that step if necessary.

On Thursday, lawyers, advocacy groups and former colleagues get their say on Gorsuch.

The panel will hear from the American Bar Association, which has already given him a unanimous “well qualified” rating, along with former colleagues and judges supporting him and advocacy groups like the Human Rights Campaign that have opposed him.

The nominee received glowing GOP reviews but complaints from frustrated Democrats that he concealed his views from the American public. Gorsuch, a federal appeals court judge in Denver, refused repeated attempts to get him to talk about key legal and political issues of the day. But he did tell Sen. Dianne Feinstein, who worried that Gorsuch would vote to restrict abortion, that “no one is looking to return us to horse and buggy days.”

Gorsuch didn’t give those looking for more information much to go on. Every time Democrats tried to draw him out on a range of serious issues, including abortion and gay rights, Gorsuch answered in the same way: “I have declined to offer any promises, hints or previews of how I’d resolve any case.”

Illinois Sen. Dick Durbin, a member of the Judiciary panel, said during a hearing break that Gorsuch may have convinced “some, but not many” of his fellow Democrats to vote for him.

Feinstein, the committee’s senior Democrat, summed up her colleagues’ frustration. “What worries me is you have been very much able to avoid any specificity like no one I have ever seen before,” Feinstein told Gorsuch. “And maybe that’s a virtue, I don’t know. But for us on this side, knowing where you stand on major questions of the day is really important to a vote ‘aye,’ and so that’s why we pressed and pressed.”

Republicans, on the other hand, couldn’t get enough of the Colorado native. Sen. Orrin Hatch said he hadn’t seen a better nominee in 40 years in the Senate.

The Supreme Court itself threw one surprise Gorsuch’s way when it ruled unanimously Wednesday in a case involving learning-disabled students, overturning a standard for special education that Gorsuch had endorsed in an earlier case on the same topic.

“Why in your early decision did you want to lower the bar so low?” Durbin asked.

Gorsuch said he was bound by an even earlier decision on the 10th U.S. Circuit Court of Appeals and said that any implication that he was against autistic children was “heartbreaking.”

“I was wrong senator, I was wrong because I was bound by circuit-court precedent,” Gorsuch said. “And I’m sorry.”