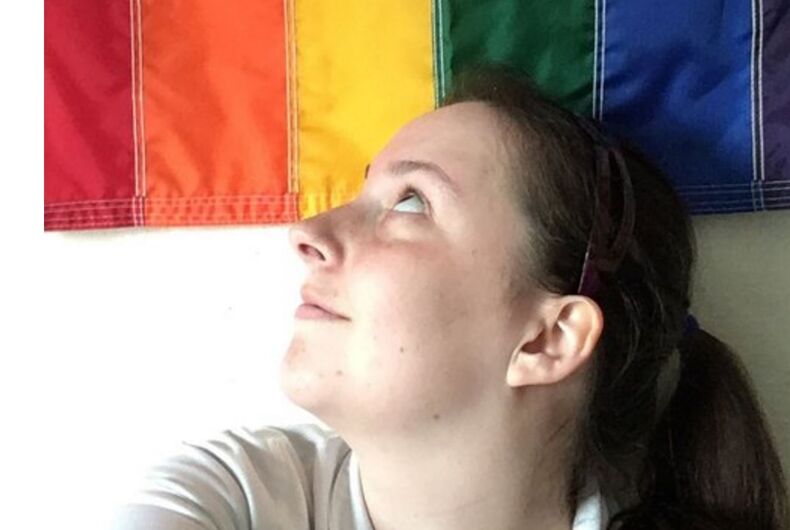 A lesbian student at Columbia University is suing the school, alleging that it failed to protect her from being raped in her own dorm room. In a lawsuit filed Tuesday, she accused the university of violating Title IX protections.

Amelia Roskin-Frazee, a sophomore and LGBTQ advocate, says she was first assaulted by an unknown man on October 5, 2015, Buzzfeed report. She says woke up to find the man on top of her, and eventually passed out due to the pain. When Roskin-Frazee came to, she says, the man was leaving her room wearing only his underwear.

After the assault, she didn’t immediately file an official report, but she sought help from multiple university sources and each failed to inform her of her rights under Title IX and the university’s own sexual misconduct policies, the complaint says.

“To be blunt,” Roskin-Frazee said in a Tuesday news conference. “I’m suing Columbia because I’m angry.”

When Roskin-Frazee made an appointment with Columbia Medial Services to address the lingering pain from the rape, the complaint alleges the person who treated her didn’t ask if she had been assaulted and instead told her she “shouldn’t have such rough sex again,” DNA Info reports.

The next week she called Columbia’s sexual assault response line to inquire about academic and housing accommodation, but the nurse who answered was unaware of any such accommodations, instead telling her she should have been on birth control and ought to report the assault to police, according to the complaint. But Roskin-Frazee didn’t want her experience to become public record, she just wanted to feel safe again.

“I felt ashamed,” she said. “Why did he target me? I felt embarrassed I couldn’t identify him.”

When Robin-Frazee reached out to the housing office to see if she could change rooms because she didn’t feel safe, they told her she would have to pay a $500 and involve her parents, the lawsuit says. So she remained in her dorm.

In early December 2015, she says she reached out to Columbia’s Executive Vice President for University Life about the alleged assault, but despite university requirements, her complaint was never sent on to the Gender-Based Misconduct Office.

Less than a month later, on December 14, the complaint alleges Roskin-Frazee was raped a second time by an assailant waiting for her outside her dorm room door. The second attack, which she believes was perpetrated by the same man as the first, was particularly brutal.

According to the lawsuit, she was tied up with her iPhone charger and gagged with her own clothing before being raped with objects including a hairbrush, scissors, and a razor while the rapist allegedly whispered in her ear, “Still a dyke?”

The next day, she was treated for injuries including vaginal tears, cuts on her thighs, and sprained wrists at St. Luke’s Hospital.