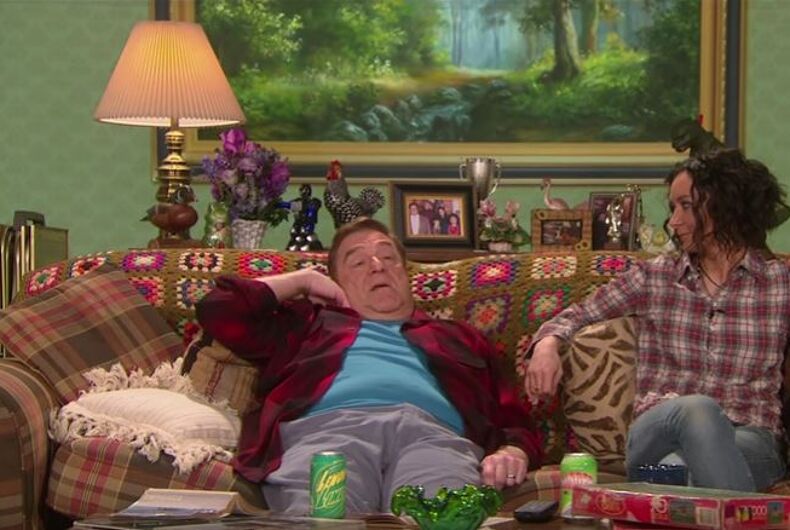 A mini Roseanne reunion delighted the audience on Friday’s episode of The Talk, with John Goodman and Sara Gilbert reprising their roles as Dan and Darlene Conner some 20 years after the beloved show left the air.

“So, uh, there’s something I’ve been wanting to talk to you about for awhile now,” Gilbert, as Darlene, says as the pair watch a basketball game.

“Well, wow. As long as you’re happy, me and your mom will support ya,” he responds. “You know, for a minute there I thought you were gonna tell me you were gay.”

“Let’s save something for halftime,” she says.

Gilbert came out as a lesbian in 2010, in the lead up to launching The Talk. She married music producer and musician Linda Perry in 2014, with whom she has a son. Gilbert also has two children with former partner Allison Adler.

Goodman was on the show to promote Kong: Skull Island.

He was asked whether he would be open to the idea of a Roseanne reboot, that is, provided they could make his character “undead.”

Gilbert said she would also be into the idea, so long as it is done right.

Goodman feels that this would be the perfect time to bring the show back.

“The times are weird enough for the family. Our theme was, ‘We’re poor, but we’re not stupid,’ or, ‘Just because we’re broke doesn’t mean we’re stupid.’ Yeah, they’d have a lot more to deal with right now,” he observed.

Watch the interview segment below.