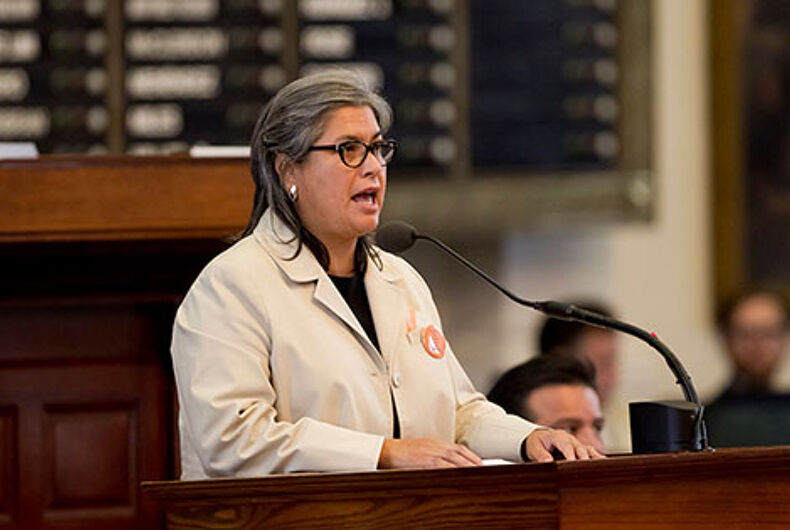 Texas State Rep. Jessica Farrar, a Democrat, responded to a recent spate of anti-choice legislation from Republicans with a bill that would punish men for “unregulated mastubatory emissions,” forcing upon them the same “unnecessary” and “invasive” procedures that she says Texas women are subjected to.

Farrar admitted on Facebook her bill is “satirical,” but the intent behind it is very serious.

Among the Republicans’ anti-choice proposals under consideration in the Lone Star State are bills to make abortion a felony,  require hospitals to bury or cremate fetal remains, and allow doctors to lie to women about their pregnancies.

“What I would like to see is this make people stop and think,” Farrar told the Tribune. “Maybe my colleagues aren’t capable of that, but the people who voted for them, or the people that didn’t vote at all, I hope that it changes their mind and helps them to decide what the priorities are.”

Her opponents at the capitol were not impressed.

Rep. Tony Tinderholt, a Republican from Arlington, Texas, is the sponsor of a bill that would charge both abortion providers and women who receive an abortion with murder.

“I’m embarrassed for Representative Farrar,” Tinderholt said. “Her attempt to compare [HB 4260] to the abortion issue shows a lack of a basic understanding of human biology. I would recommend that she consider taking a high school biology class from a local public or charter school before filing another bill on the matter.”

Farrar is unswayed, noting in an interview with the paper that supporters of President Trump feel encouraged and  “are on fire now.”

“They’re off the chain now,” Farrar said. “If they can elect someone based on making racist remarks and derogatory remarks toward women and such, then we’ve just given them license to offend and license to be even worse than before.”