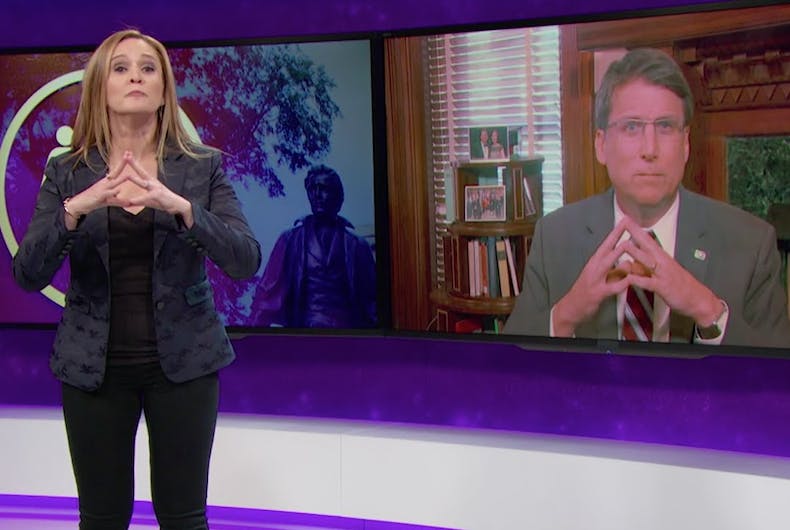 Former North Carolina governor Pat “Don’t Call Me a Bigot Just Because I Took Away LGBTQ Rights” McCrory recently whined in an interview that he is having a hard time finding work these days.

After losing his reelection bid to Democratic challenger Roy Cooper, McCrory first appeared to be on track for a Trump Cabinet position. So far, that has yet to materialize and it seems his luck on the private industry front isn’t faring much better.

All because people think he is a bigot, just because he signed one of the most anti-LGBTQ laws in the country, House Bill 2 (HB2), which requires transgender people to use the bathrooms matching the gender on their birth certificates in government buildings and invalidated all non-discrimination ordinances passed by cities and municipalities throughout the state.

“Sorry you’re having trouble finding a new job, @PatMcCroryNC,” Bee tweeted out on Tuesday. “Here, we wanted to help!”

That “help” came in the form of a fresh new resume for the onetime lawmaker.

Sorry you're having trouble finding a new job, @PatMcCroryNC. Here, we wanted to help! pic.twitter.com/jSSfugIHwN

They have helped him out with a new objective: “Looking for an exciting new opportunity, either as a TV news contributor at a media outlet that’s unencumbered by PC culture OR as a vice principal of one of the good schools.”

Under experience, as governor, the following are included:

“Passed legislation defining voting as between one ballot and one white person.”

As for his time as Charlotte mayor, he “Created NASCAR Hall of Fame,” and “That’s it, really.”

He also is shown to have been involved in the “pre-gay Boy Scouts” and is “Not tricked by the transes.”

When reached for comment, McCrory said he had not seen the resume and downplayed his need for employment.

“My job situation is fine and so is my resume,” he told The Charlotte Observer. “It’s my driving that needs help.”

We can only assume he was referring to how he drove North Carolina’s economy and future off a cliff.

Did you miss the gay couple in Volvo’s latest car commercial?