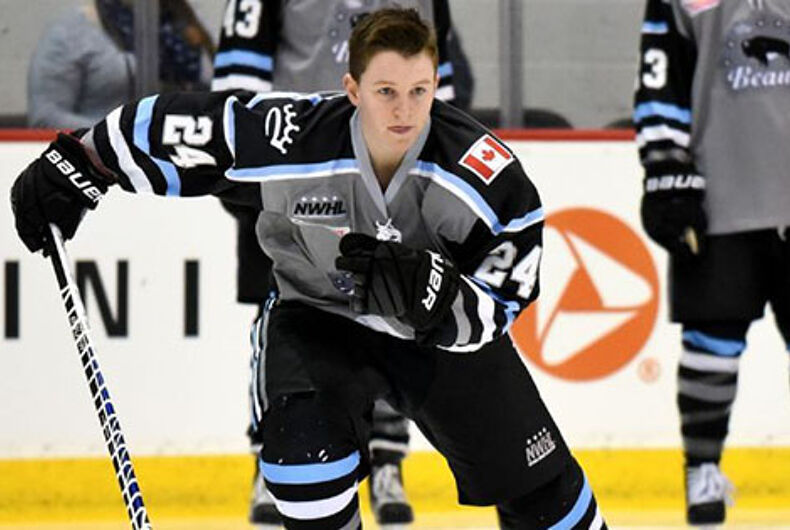 After 15 years on the ice, Harrison Browne told National Public Radio it’s time to hang up his skates, at the ripe old age of 23.

Browne made headlines last fall as America’s first transgender professional hockey player. He skates for the Buffalo Beauts, a team in the National Women’s Hockey League, and has helped lead them to a crucial game tonight against the New York Riveters, as they vie to advance to the next round of the Isobel Cup playoffs. A loss would mean not only the end of the season, but the end of his career, Browne said.

The Beauts forward announced this week he is retiring because he has other priorities to attend to.

“I want to start transitioning and seeing myself in the mirror the way I see on the inside.”

Browne, who is also known by the nickname “Brownie,” came out publicly in an interview with ESPN last year, his second with the league. He had told friends and family when he was still in college but wasn’t ready then to go full-time.

“I identify as a man,” Browne told the sports network. “My family is starting to come to grips with it, now it’s my time to be known as who I am, to be authentic and to hear my name said right when I get a point, or see my name on a website.”

In the months since then, Browne told NPR the support he’s received has been overwhelming.

“My teammates, my coaches, and the league did a great job of just treating me like a regular teammate.”

“I started to feel a really big disconnect between my personal identity and my professional identity,” Browne said. “Whenever I would hear my name announced…I just wanted to align it.”

Fellow transgender athletes have sent him messages of encouragement via social media, telling him “they are so thankful that there’s somebody out there that did what they couldn’t,” he said.