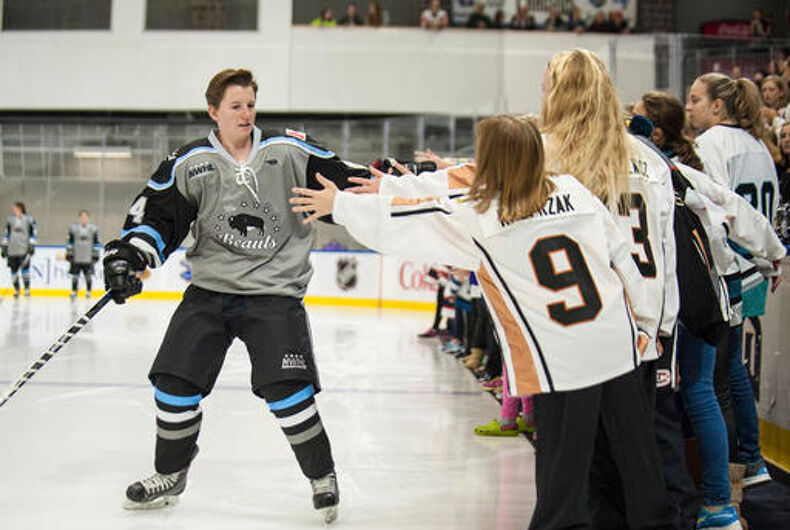 In this photo provided by the NWHL, date not known, Buffalo Beauts forward Harrison Browne high-fives fans during player introductions before a game in Buffalo, N.Y. Browne is preparing to make his debut for the National Women's Hockey League Buffalo Beauts as the second-year professional league's first transgender player. Photo: (Michael P. Majewski/NWHL via AP)

The Buffalo Beauts rising star, who is also known by the nickname “Brownie,” came out publicly in a recent interview with ESPN.

“I identify as a man,” Browne told ESPN. “My family is starting to come to grips with it, now it’s my time to be known as who I am, to be authentic and to hear my name said right when I get a point, or see my name on a website.”

And he got that honor during last night’s game against the Boston Pride, where he scored his team’s only point.

“It was unreal,” Browne told the Associated Press. “I’ve never felt something like that before.”

Originally from Canada, Browne first came out as transgender to his coaches at the University of Maine, where he graduated in 2014. Browne told ESPN that opening up allowed him to focus on hockey.

While he had initially planned to begin his medical transition after graduation, the creation of the NWHL encouraged him to put those plans on hold a little longer so that he could continue to play. While athletic rules often bar transgender men who are taking testosterone from competing with women, Browne is not the first transgender man to play on a women’s team.

Kye Allums became the first openly transgender athlete to play on a Division 1 collegiate team when he played on the George Washington Colonials women’s basketball.

Browne’s debut went smoothly until a Beauts spokeswoman cut him off as he began to answer a question about North Carolina’s anti-LGBT law.

“We’re not going to answer that,” the spokeswoman said. “It’s about Brownie tonight.”

NWHL Commissioner Dani Rylan, who has expressed her support for Browne and is working with the league to craft a transgender-inclusive policy, said she couldn’t comment on the exchange because she was unaware of Browne’s news conference being cut short. Rylan also told the Associated Press she is not familiar with North Carolina’s transgender law.

“We’re here to support him,” Rylan told ESPN. “It’s really not a big deal when you look at it, we’re respecting his name, the pronouns and his request to be his authentic self.”

Browne told ESPN that after he finishes playing with the NWHL, he would consider trying out for the NHL, depending on how his body transitions.

When Trump mocks people with disabilities, this is who he’s insulting