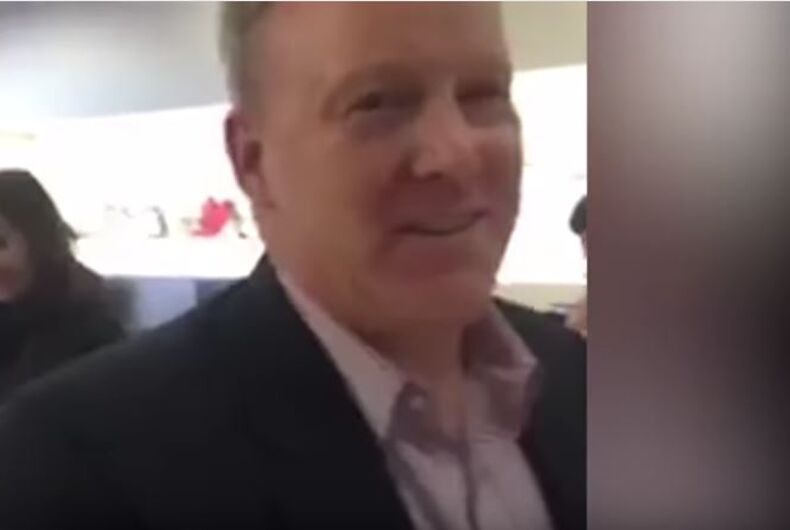 “How does it feel to work for a fascist?”

That was the first question Shree Chauhan, 33, asked White House Press Secretary Sean Spicer when she confronted him at an Apple store on Saturday night, and the hardballs kept coming. Chauhan asked about the Russia connection and whether he played a part.

“Are you a criminal as well? Have you committed treason, too?” she asked in a calm voice, while recording a video to Periscope that would immediately go viral.

“We live in a great country,” Spicer, wearing an awkward smile, told Chauhan.

“It’s such a great country that allows you to be here,” Spicer continued.

“So I watched the video over and over again. And his words were clear: ‘Such a great country that allows you to be here.’ That is racism and it is an implied threat,” Chauhan, who is Indian-American, wrote on a post on the website Medium, titled “Such a Great Country, Such Nasty Bigotry.”

“When I confronted Mr. Spicer, I wanted to speak truth to power. It wasn’t until hours later that it was revealed to me that Mr. Spicer had said, ‘such a great country that allows you to be here,’ to me,” she wrote.

“Very early on, I knew that Donald J. Trump was dangerous for America and had fascist tendencies. His views on people of color, immigrants and Muslims are abhorrent. His actions against women are despicable. His willful disregard for our Constitutional rights is well, fascist,” she said.

“I was devastated by the election but I have channeled my anxiety, sadness, and anger into action. I tell anybody who will listen, ways in which they can resist. I have explained how dire the situation is to my closest friends and family, and I also organized that Betsy DeVos blockade at a local D.C. school with families and community partners.

“It is customary to give public figures their space…However, given what Mr. Spicer and his boss are doing to this country, I do not believe they are entitled to these norms and customs,” she continued.

“It’s one thing to have a Twitter egg tell say you do not belong in America, it is quite another to have the Press Secretary of the United States of America do so. I am still astounded. And while I am fearless, I wonder how this administration will use its power to silence ordinary people like me,” she writes.

“I am not going to dwell on fear. We have still not lost our country and the values that are most important to us. America stands for liberty, justice and equality. We have not always lived up to our values, but we work regularly to bend the arc towards a more perfect union,” she declared.

Watch the exchange in the video below.