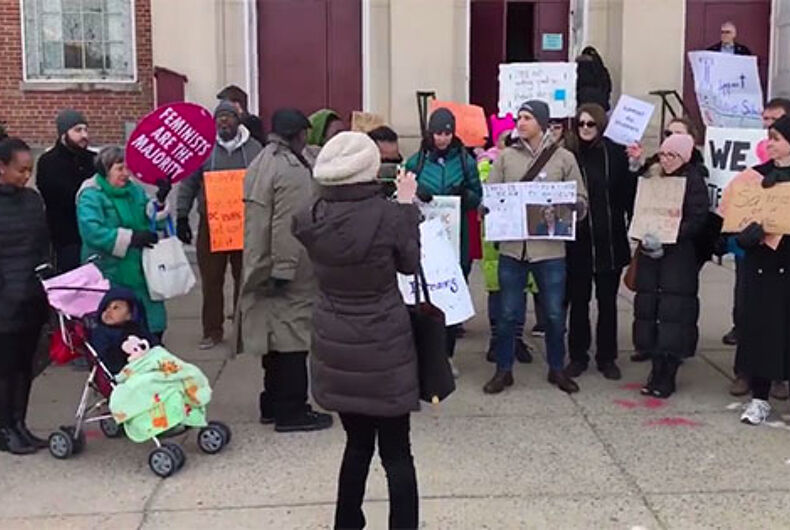 She may be a billionaire now in charge of the U.S. Department of Education, but Betsy DeVos is finding out the hard way she will face a never-ending battle to try to win over parents, public school teachers and their union.

Her visit Friday to Jefferson Middle School Academy in Southwest Washington, D.C., as reported by the Washington Post, did not go as planned.

A handful of protesters briefly blocked one backdoor to to the school and forced DeVos to retreat to find another entrance, as shown in video from the event tweeted by WJLA-TV.

The Post reported she eventually found a way in and met with some parents.

A teacher from a D.C. charter school who declined to be named, carried a sign outside Jefferson that said: ‘‘Ms. DeVos: Our children are not props.’’

‘‘Betsy DeVos does not represent our students or our families here in D.C.,’’ the teacher told the newspaper. ‘‘She doesn’t have our best interests at heart.’’

DeVos arrived at 10 a.m. for the event closed to the media, where several dozen members of the Washington Teachers Union, parents and other activists had gathered in front of the school. It was DeVos’s first visit to a public school since being sworn-in this week. Her nomination, which was dogged by reports her family financially supported the cause of so-called reparative or “ex-gay” therapy, was only confirmed when Vice President Mike Pence cast a historic tie-breaking vote.

Handful of protesters now standing in front of SW DC middle school ahead of visit by Sec. Betsy DeVos pic.twitter.com/uzhuyeXEeE

Jefferson, a few blocks from Department of Education headquarters, is often cited as an example of D.C.’s systemwide improvements in public schools begun five years ago.

“We want to share the message that we love our public school system,’’ union president Elizabeth Davis told reporters outside Jefferson. ‘‘Public education teachers believe that public education is the cornerstone, it’s the foundation of our society.’’

Davis tweeted about the scheduled visit on Twitter Thursday, and urged parents and teachers to show up to ‘‘say ‘NO’ to privatization of our schools.’’

So effective was that demonstration that an advance team for DeVos was also briefly blocked from entering the school.