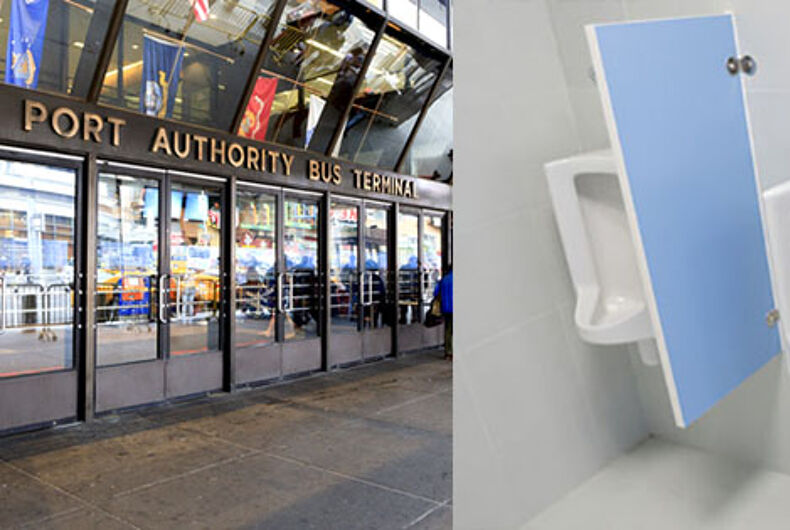 The complaint accuses officers of making targeted arrests on the discriminatory basis of actual or perceived sexual orientation and to boost quality of life arrest statistics.

The New York Daily News reports the urinals in the terminal’s bathrooms have privacy walls — which should block prying eyes “under any definition of normal circumstances,” according to the suit. The paper reported that the officers stare at their targets while they’re using the urinal.

“In some cases, the officer will actually step back from the urinal in order to see around the privacy wall, in an effort to view the target’s hands and genitals,” said the lawyers in their complaint.

Upon exiting the restroom, the suspects are then arrested by a team of PAPD officers, the lawsuit said. One plaintiff told the paper the PAPD cops dubbed his arresting officer “the gay whisperer,” for his proclivity at making arrests of this kind.

“The PAPD have continued to make such targeted arrests knowing or believing that most of those arrested will ultimately be forced to plead to lesser charges to avoid public embarrassment and humiliation, costly legal fees, and jail sentences, as well as reputational and professional harm associated with the false charges,” the suit explained.

The suit was filed by Winston & Strawn LLP and the Legal Aid Society. The plaintiffs are seeking a stop to the practice, as well as compensatory and punitive damages.

“The use of police assets and resources in this unconstitutional and unconscionable way is particularly stunning in light of the world in which we live,” said Thomas Patrick Lane, partner with Winston & Strawn.

Do you agree with these new guidelines on gender-neutral pronouns & ‘LGBTQ’?