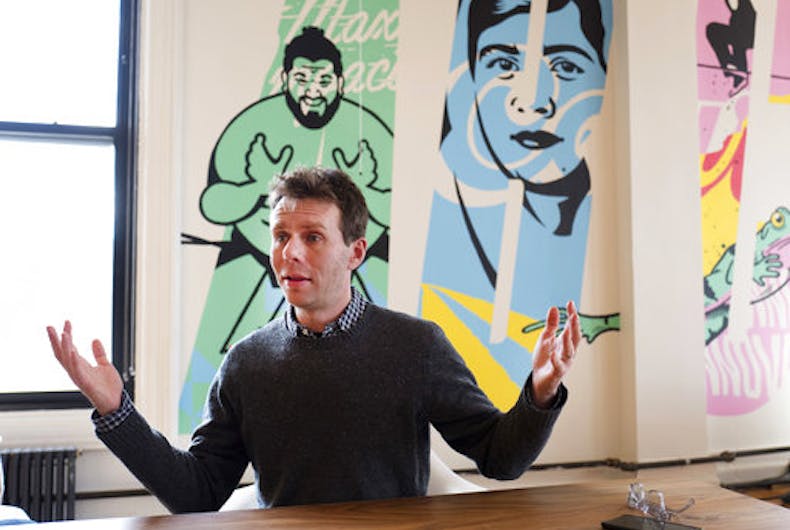 In this March 13, 2017 photo, Scott Heiferman, CEO of Meetup, talks during an interview in New York. The online networking site is partnering with a left-leaning labor union and a former Hillary Clinton aide to roll out a platform for organizing people who oppose President Donald Trump. Photo: AP Photo/Mark Lennihan

NEW YORK (AP) — Meetup.com is taking a leap into the Trump resistance.

The New York-based networking site will unveil plans in the coming days to partner with a labor group — under the guidance of a former Hillary Clinton aide — to coordinate protests among more than 120,000 activists already involved with anti-Trump Meetup groups.

It’s a risky move for a tech company that has helped millions come together to share interests of all kinds, from hiking to languages to President Donald Trump himself. But it reflects an increasing willingness of some major technology firms to push back against the Republican president.

Meetup CEO Scott Heiferman told The Associated Press that the new arrangement, to be known only as #Resist, gives the loosely organized protest movement the infrastructure needed to execute large responses to the new president’s policies.

“It’s one thing for a CEO to say, ‘I’m going to stand up against a politician,'” Heiferman said. “It’s even further for the company itself to mobilize people.”

For Heiferman and other tech leaders, Trump’s push to block immigration from several Muslim-majority countries marked a tipping point.

“When a certain line is crossed,” he said, “we have a civic duty not to be quiet.”

The White House did not respond to a request Friday for comment about Meetup’s plans.

About 40 technology companies met privately this month in New York City to brainstorm ways to push back against Trump policies on immigration, transgender protections, women’s health and arts funding, as well as more traditional technology issues like net neutrality and encryption.

The meeting was designed to “get beyond handwringing and move toward real action,” said Michal Rosenn, general counsel for the Brooklyn-based company Kickstarter.

Kickstarter and Meetup were also among 58 technology companies that signed a friend-of-the-court brief on Tuesday charging that the White House’s revised immigration plan would harm their employees and customers.

Airbnb, Apple, Twitter and Yelp filed a court brief late last month to protest the Trump administration’s decision to rescind guidance that instructed schools to allow transgender students to use bathrooms that match their gender identity.

Meetup, which employs 175 people and claims 30 million users worldwide, has gone further than most.

Disturbed by Trump’s initial push for a travel ban, the firm held a company-wide “resist-a-thon” last month and unveiled more than 1,000 new “#resist” Meetup groups that didn’t have to pay the standard $15 monthly fee to advertise their events on the site. Currently, there are more than 1,000 Meetup groups devoted to the Trump resistance across the country.

The Meetup software is “ready-made for rapid response,” Morales Rocketto said, and has already been used to mobilize Trump protesters in recent weeks, including resistance events at Boston Logan’s airport and a march in Mississippi.

Such actions alienated customers like Maria Lozinsky, a Trump supporter in Aurora, Colorado. She reacted by disbanding Meetup groups she had led for people interested in interior design and science fiction.

“It’s just so sickening,” she said of the proliferation of anti-Trump groups.

Meetup won’t be restricting the ability of pro-Trump groups to use its main site, which it insists is nonpartisan.

Marketing and branding experts suggest that in the short run, it could be a zero sum game for companies that wade into politics. Inevitably, some offended customers will leave, while others take their place.

“Those who are hostile have longer memories and are more likely to hold a grudge,” he said.

Political consultant Liz Mair, who also advises private businesses, warned that the biggest risk in this case “is Trump taking retaliatory action against entities he sees as inherently opposed to him.”

Neil Blumenthal, co-CEO of the web-based global eyewear retailer Warby Parker, which was among the companies that filed legal briefs opposing Trump’s immigration and transgender policies, acknowledged political activism could turn some consumers off.

“There’s always the risk that when you stand for something there can be a backlash,” Blumenthal said. “The bigger risk is to stand for nothing.”

Will Trump’s budget cuts to medical research stall a cure for HIV?

If elected, Raymond Meza would be the first openly gay Latino congressman