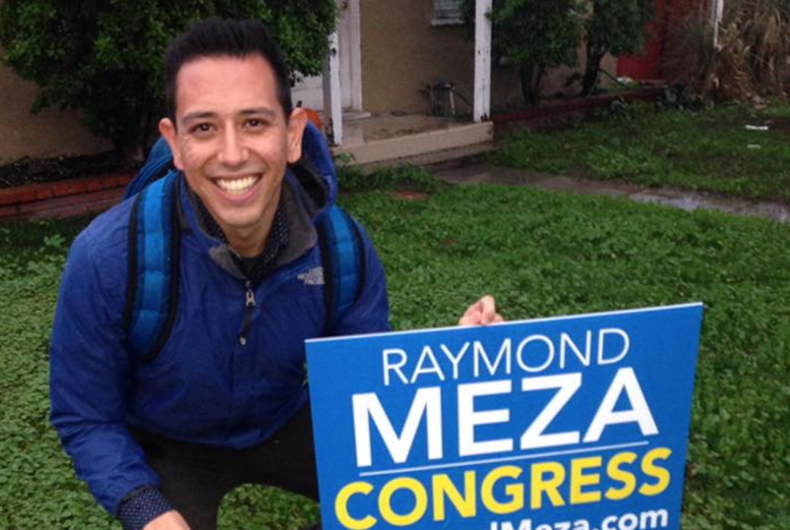 One way or another, the special election for California’s 34th congressional district — vacated when Rep. became the state’s new attorney general — is likely to add a Democrat to Congress. The district, which includes much of diverse downtown Los Angeles, has nearly always gone blue.

But that doesn’t mean each of the 23 candidates vying in the April 4 primary are one in the same. Among them is a candidate who, if elected to office, would be the first openly gay Latino congressman.

Raymond Meza, an SEIU labor organizer, grew up in the district and came out at age 14. Meza, who worked on the successful Fight for $15 campaign to increase the minimum wage to $15 an hour, has been organizing around economic justice since he was in college.

In an interview with Teen Vogue, he credits his community’s diversity for an adolescence free from anti-gay bullying and harassment.

“One of the values I’m running on in this campaign is that this district celebrates diversity. That’s been really important to me. I experienced that in a really personal way when I came out of the closet,” Meza said. “People were taken aback, but I was never bullied or harassed.”

He added that he knows what a privilege that was, especially in 1999, and that his passion for social justice comes in part from recognizing not everyone has that experience. Meza said he hopes to be a possibilities model, showing young LGBTQ people that who they are doesn’t have to hold them back from what they could become.

His identities would also lend him credibility in shaping policy that affects LGBTQ communities.

“We will have someone in elected office who isn’t just an advocate, but is speaking from personal experience,” Meza said. “Someone who went through that uncomfortable challenge and the fear of retaliation or bullying. It sends a loud message to youth.”

But ultimately, Meza wants his message to reach far beyond his district, Democrats, or the LGBTQ and Latino communities. He believes that his background as a community organize could help transform the national political landscape.

“It gives me a unique sense of our current political climate because this district is going to send a Democrat to Congress,” he said. “All of us say the right things and vote the right way. It’s who has the experience of being able to involve people in the political process that can get people to care about things they never cared about before?”

Meza faces 22 other candidates in the April 4 primary, including 16 other Democrats. It’s a crowded field with a diverse and high-profile pool of candidates, including a former White House aide for President Barack Obama, the son of a former presidential candidate, an LA County deputy district attorney, and a state assemblyman.