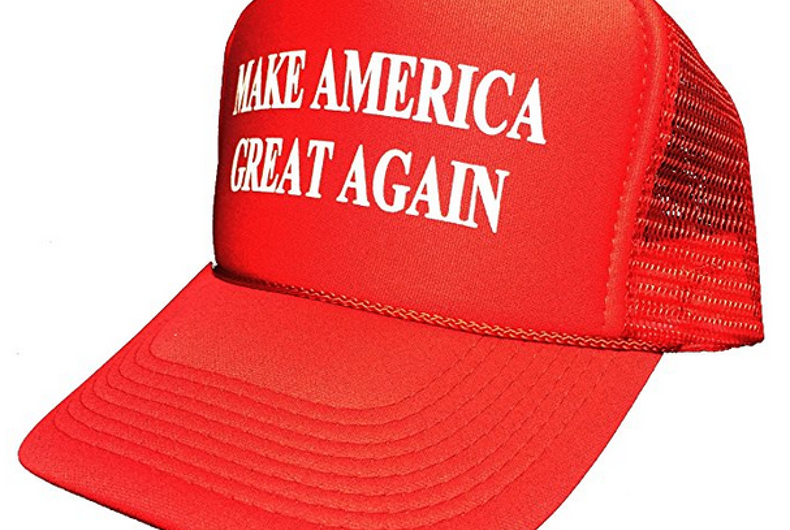 A man who claims he was refused service for wearing a “Make America Great Again” hat in a West Village bar is suing for emotional distress.

Greg Piatek, 30, says he and some friends decided to go to The Happiest Hour after they visited the 9/11 Memorial Museum. Piatek ordered a jalapeno margarita and the others ordered beer, which they received. Piatek claims that they were ignored when they tried to order a second round while other patrons around them were being served.

Piatek also alleges that staff members at The Happiest Hour made comments about his hat. The Philadelphia accountant says that one bartender told the group “I can’t believe you would support someone so terrible and you must be as terrible a person.”

He also says that another server said, “Is that hat a joke?”

He says that a manager eventually told the group that they needed to leave and bouncers escorted them from the bar. Piatek called the police but was told that the bar didn’t commit a crime.

Piatek is now suing bar owner John Neidich, saying that he suffers from “anxiety and severe emotional distress.” He is accusing the bar of discriminating against him because of his “sincerely held set of beliefs in which he felt it was necessary to wear a particular hat in remembrance of the souls who lost their lives and as a symbol of freedom/free speech.”

The Gothamist reports that the bar has received nasty comments from rightwingers online. A Yelp reviewer wrote, “I hope he takes you for everything you got- I hope your stupidity, ignorance and shear disrespect shuts you down.”

For all their macho rhetoric about how minorities should just toughen up, Trump voters show again and again just how precious they are. Piatek doesn’t just want a “safe space” for people who share his beliefs, he expects that safe space to exist everywhere.

The right loves to say that they oppose “political correctness,” taking offense to anyone who shows the slightest concern for the well-being of minorities. Piatek voted for a guy who bragged about grabbing women “by the pussy,” called for the execution of a group of black and latino teens even after they were proved innocent, called Mexicans “rapists,” and wanted to ban Muslims from the United States.

But refuse to serve a conservative a second jalapeno margarita and they’ll call the cops.

Rightwingers are precious, and they’re precious for a reason. Conservatives define “respect” in a fundamentally different way than most people do, seeing it as a one-way street. Some people are meant to receive respect from others, and, in the conservative mentality, those people are exempted from showing other people the same respect.

That worldview is the basis for feudal system, not a modern democracy.

New York City doesn’t have a law that bans discrimination on the basis of political affiliation, and Piatek’s lawyer should have explained to him that the First Amendment doesn’t require bars to protect their patron’s free speech. Then again, the guy doesn’t seem to understand much about how the world works, so why not take him for a billable ride?

To cover Trump and his post-fact fiefdom, reporters need to do this