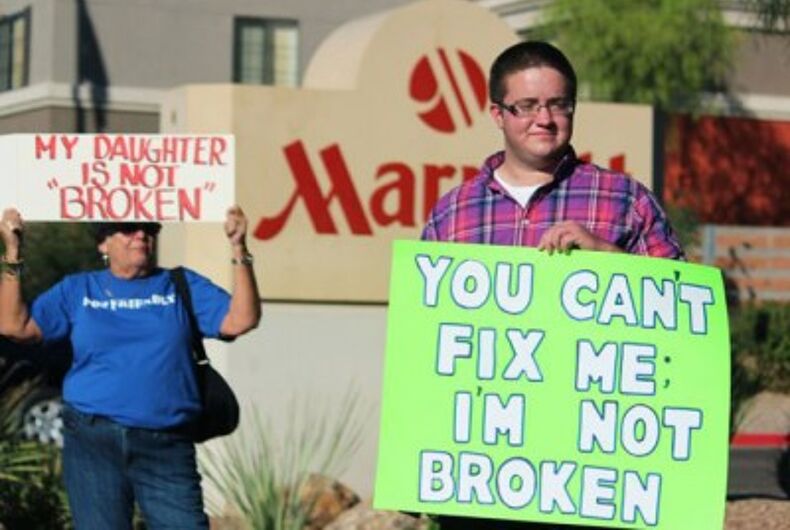 Protesters demonstrate outside a gathering for the National Association For Research and Therapy of Homosexuality (NARTH) in Phoenix, Ariz., in 2013. Photo: DAVID CRARY, AP

An essential element of liberty is the freedom to define oneself. One of the chief violators of this principle, Joseph Nicolosi, died recently at age 70.

Nicolosi established and promoted so-called “reparative therapy” (a.k.a. conversion therapy). As a psychologist and a co-founder of the National Association for Research and Therapy of Homosexuality (NARTH), Nicolosi advanced his belief that people drawn sexually to their own sex can and should change to heterosexuality in the process of “therapy.” He enumerated his theories about human sexuality in his highly controversial and contested book Reparative Therapy of Male Homosexuality: A New Clinical Approach.

From the so-called “Eugenics Movement” of the mid-nineteenth century though the twentieth century and beyond, medical and psychological professions have often proposed and addressed, in starkly medical terms, the alleged “deficiencies,” “mental diseases,” and even “physical” differences of lesbian, gay, bisexual, and transgender (LGBT) people compared to heterosexual and cisgender people.

During what has come to be known as the “Eugenics” movement in science (coined by Francis Galton in England in 1883 from the Greek word meaning “well born” or “of good origins or breeding” in which the socially constructed hierarchical concept of “race” was codified), some members of the scientific community viewed people attracted to their own sex as constituting a distinct biological or racial type — those who could be distinguished from “normal” people through anatomical markers.

For example, Dr. G. Frank Lydston, a urologist, surgeon, and professor from Chicago, in 1889 delivered a lecture titled “Sexual Perversion” at the College of Physicians and Surgeons in Chicago in which he referred to homosexuals as “sexual perverts” who are “physically abnormal.”

“…the unfortunate class of individuals who are characterized by perverted sexuality have been viewed in the light of their moral responsibility rather than as the victims of a physical and incidentally of a mental defect…. Even to the moralist there should be much satisfaction in the thought that a large class of sexual perverts are physically abnormal rather than morally leprous.”