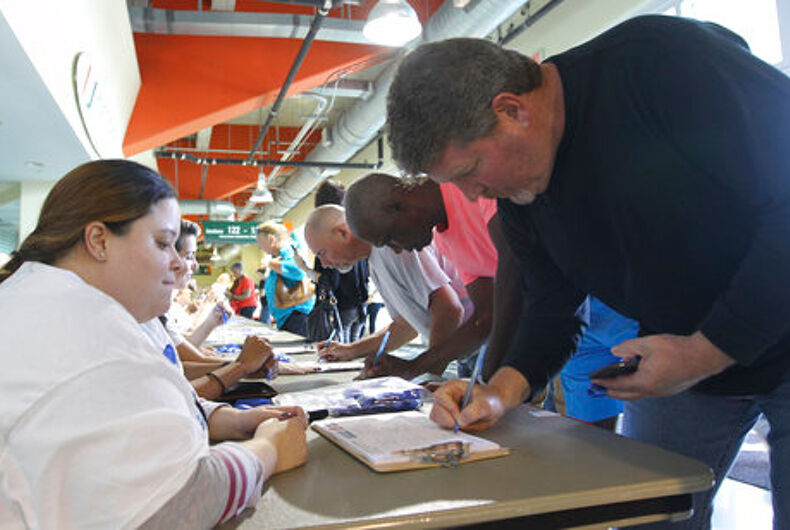 Volunteer Lily Miranda, left, watches as Jim Eriksen, right checks in before a town hall meeting called "The Resistance Training" hosted by the American Civil Liberties Union, Saturday, March 11, 2017, in Coral Gables, Fla. The ACLU is launching a nationwide training event to make people aware of their rights as protesters. Organizers say the event Saturday at a sports arena on the University of Miami campus is being livestreamed to locations in all 50 states. Photo: Luis M. Alvarez

CORAL GABLES, Fla. (AP) — The American Civil Liberties Union staged a nationwide training event Saturday to make sure people are aware of their rights as protesters and urge organized, public resistance by those opposed to policies of President Donald Trump.

Organizers said the event at a sports arena on the University of Miami campus was livestreamed to locations in all 50 states. ACLU Executive Director Anthony Romero said 200,000 people had signed up to attend one of an estimated 2,000 local events.

The event, staged in town hall style, was aimed at capitalizing on numerous demonstrations since Trump’s election in November and to make sure people know their rights to protest, Romero said. He said priority issues are immigration, the First Amendment free speech and religious freedom rights, civil and reproductive rights and rights of gay, lesbian and transgender people.

The ACLU also launched a new grassroots online organizing platform called PeoplePower.org. It’s billed as a way for people considering a local protest or rally to connect and coordinate with others around the country with similar intentions, and to provide details of ACLU initiatives.

Another plan is creation of “freedom cities” around the country that would encourage local officials to pass laws resisting Trump policies such as stepped-up deportations of people living in the country illegally, said Faiz Shakir, ACLU national political director.

Other parts of Saturday’s event detailed the rules for demonstrations on streets, sidewalks and in public parks, and the rights people have when arrested such as the right to remain silent. ACLU attorney Lee Rowland said large demonstrations generally require a local permit, but government can’t typically shut down protesters in public places without good reason.

“The government can’t censor you just because it disagrees with your opinion,” Rowland said.

Also speaking at the event was Padma Lakshmi, an Indian-born cookbook author, actress, model and television host. She said she emigrated to the U.S. at age four and said the nation appears to be retreating from its welcoming ways.

“Lately I’ve started to feel like an outsider,” she said. “What makes America great is our culture of inclusion. We must not tolerate the intolerance.”