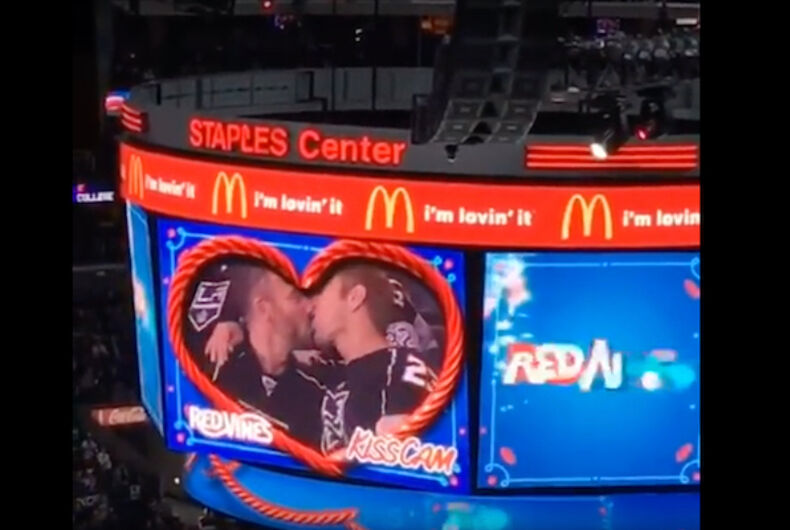 A same-sex kiss on a "kiss cam" in Los Angeles.Photo: Screenshot/YouTube

An executive with the Sheffield Steelers hockey team said he apologized “if people take offense” for comments suggesting two men who were kissing should be removed by security from the stadium.

David Simms, who was acting as a commentator at a hockey game last Saturday, was making jokes about couples who were kissing as the camera panned across the audience. When a gay male couple was shown on the “kiss-cam,” Simms said, “That’s disgusting. Security, get rid of them.”

Responding to criticism on Twitter, Simms tweeted “Rubbish. Said as a joke, taken as a joke except for those who want to be offended.” His Twitter account has been made private.

He later walked his words back on Twitter: “Well I gave all the haters all the ammunition they needed last night and have sincerely apologised for doing so. I do so again.”

In a video interview with The Star this week, Simms said: “I am not homophobic, you have known me long enough. I haven’t got a bad bone in my body. But if the comments made upset or offended anybody then of course I apologize completely.”

“But it was a fun moment on the kiss-cam, we were flicking between different couples, we were trying to trying to [offer] tickets for the final of the Challenge Cup and it was ‘Oh great great kiss, oh bad kiss bad kiss, and yes, and then the comment came out ‘Oh, Security, remove them immediately.’ I apologize if people take offense. Maybe I live in a different world, I can’t really see the offense I have caused.”

He says he regrets the joke, but just because of “the aftermath.” He added, “In this day and age you can’t upset one person” and implied that he was being criticized by people who “are looking to be offended.”

For their part, the Steelers released a statement with a real apology.

The club would like to put on record our sincere apology to any fans or members of the LGBT community who were offended by comments made by David Simms during the game on Saturday 4th March. In no way did Mr. Simms intend what was said in a derogatory or offensive way. David Simms has personally apologised to fans on social media, the club, the EIHL and has been in touch with LGBT direct. Thank you also to everyone who has taken time to write to the club and voice concerns over this incident.

A Sheffield councillor and LGBT activist Neal Gibson called the comments “horrifying” and said that he “will be taking up this matter with management.”

Is California about to repeal their HIV criminalization law?