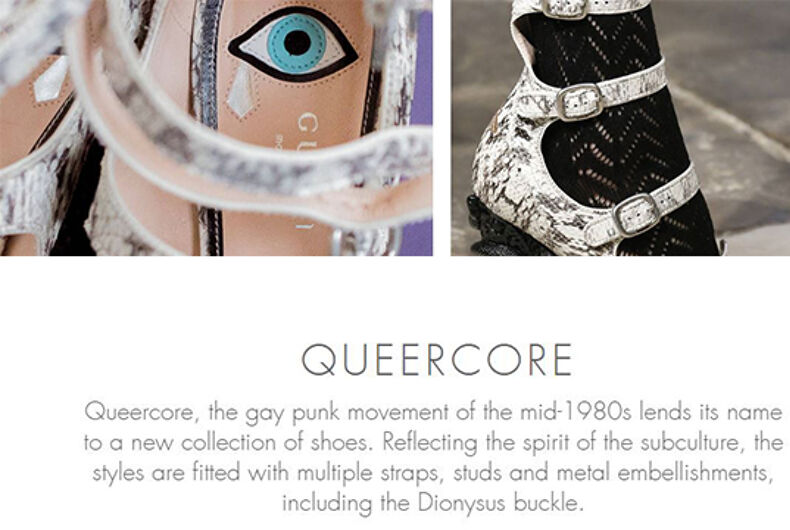 Gucci's use of the term "Queercore" is not sitting well. Photo: Gucci

The website for high-end luxury fashion line Gucci’s 2017 cruise collection features a surprising statement: “Queercore, the gay punk movement of the mid-1980s lends its name to a new collection of shoes.”

According to the Gucci website, the “Queercore” shoe collection reflects “the spirit of the subculture.” Prices for the rhinestone-buckled shoes range from about $1,250 for a pair of brogues, to crystal-embellished, gold pumps in the $2,500 range. That’s one spendy subculture.

The only problem is, the parents of the gay punk movement were taken by surprise when the line was announced, with no permissions requested or granted. And the artists who created the Queercore and Homocore zines, music, and films while toiling in obscurity and relative poverty are not happy about Gucci’s borrowing their life’s work for a line of shoes.

“Queercore didn’t ‘lend it’s name’ to Gucci for their shoes. I should know, I invented the term ‘Queercore,’” legendary punk filmmaker and musician G.B. Jones told LGBTQ Nation. “They stole it, plain and simple. It’s theft.”

In a 2008 interview with the blog East Village Boys, Jones said “We wanted to really bug the mainstream gays and lesbians while at the same time upsetting the punks as well, so we started the Queercore movement.”

Queercore bloomed into a subculture within a subculture, in much the way that its sister Riot Grrrl movement made space for women in the macho hardcore world of moshpits and constant touring that was punk before the internet. It spoke to young LGBT people who lived as outsiders in a homophobic and transphobic society, who at the same time didn’t feel a kinship with the mainstream gay community’s vapid bar culture and assimilationist aims.

“I’m sure if half the people buying these shoes knew what Queercore was really all about, they’d return those shoes in a heartbeat,” said Jones.

There’s no doubt that Queercore was a specific arts movement created by a specified group of people. In books like Homocore: The Loud and Raucous Rise of Queer Rock and countless articles and academic papers, the roots of the movement are laid out in painstaking detail.

So why did Gucci, whose parent company Kering brags of $11 billion in annual revenue according to its financial reports, create an entire line called Queercore without first notifying Jones and company?

“You’d think with all the money they pay their people, someone at the office could have come up with something original,” Jones said. “I live on less in an entire month than it would cost to buy one pair of these shoes, and I managed to invent the term!”

LGBTQ Nation sent multiple requests for comment to Kering’s press office but did not receive a response.

“It’s truly absurd and I’d love to see a class action lawsuit brought upon Gucci by every artist who ever felt kinship to Queercore,” Pansy Division’s Chris Freeman told LGBTQ Nation. “None of us made any bank whatsoever. At most, I was able to pay the $300 rent for my single room in an SF flat for a few months when I got home from 6 months on tour.”

Joanna Brown, who began Homocore Chicago with Mark Freitas in 1992, told LGBTQ Nation that she did not understand how Gucci’s shoes relate to a movement that “was diametrically opposed to consumerism” and “actively opposed gay-targeted advertising and marketing.”

The first year that Homocore Chicago marched in the city’s pride parade, said Brown, they walked with a hand-painted banner reading “Stonewall was a riot not a brand name.”

The cultural atmosphere at the time was one of still-rampant homophobia, but with some parts of gay culture slowly becoming more acceptable to the mainstream. Still, said Brown, “In 1990 Gucci wouldn’t have called any of their lines ‘queer’ anything.”

“The Queercore movement was always about making Do-It-Yourself queer culture outside the realm of the corporate world,” Roberts said. “To have our very name co-opted by a wealthy corporation is disgusting.”

The sheer wealth of the company and the absurd price point of the shoes led some to ask whether Gucci might be able to somehow give back to the community that it had so brashly borrowed from.

Iraya Robles, of 1990’s Queercore band Sta-Prest and co-writer of the seminal Kathleen Hanna film In Search of Margo-Go, told LGBTQ Nation she wasn’t surprised that Queercore had fallen victim to corporate commodification, but said it was perplexing that Gucci didn’t ask any Queercore founders to weigh in.

“It is extra absurd because so many people involved with the ongoing waves of Queercore are actually immensely talented artists, designers, DIY stylists, vintage collectors, and fashion aficionados,” said Robles.

While it’s too late for Gucci to ask permission, Jones suggested that if the company is interested in queer movements, it could start by using corporate advocacy to help the ones currently taking place. Jones noted that Gucci shops exist in a handful of countries where homosexuality is punishable by death, like in Qatar and Saudi Arabia.

“What are they doing to help the LGBT communities in these places? Are they helping them fight for their rights?” asked Jones. “These are the questions that need to be asked. Because selling them shoes is not helping.”

Is the Trump Administration erasing our elders by refusing to count them?